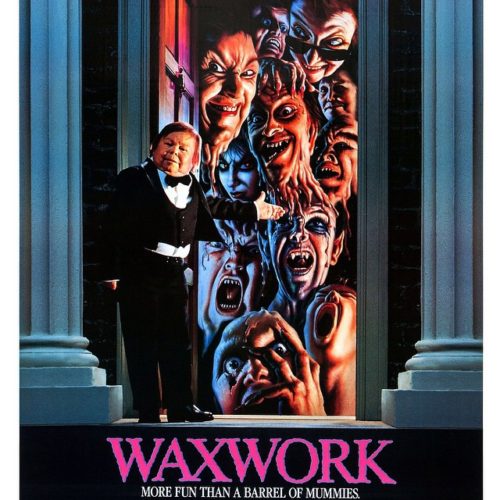 I have seen Waxwork (1988) for the first time (“W” of #AtoZHorror in August/September) and while I didn’t know anything about this movie till this year, I decided to blind buy it at a store for â‚¬6. I heard some good things, so I thought I would love it too. I also loved the trailer and the female lead: Deborah Foreman (April Fool’s Day). Did this movie surprise me on any levels? Yes and no… I really like how this movie starts, it was like your typical 80’s slasher. The characters were likeable and I liked the settings. However, things started to get problematic for me once the time swapping begun. These scenes took on forever and basically drained the entire 80s feel for me.

It did get REALLY over the top and it isn’t low on blood either. I just wish it got more creepier and atmospheric, instead we get these abnormal and sometimes bizarre time swaps to god knows which century and events. It may sounds fun on paper but it wasn’t really appealing to see on screen. The actors really tried their best and the characters were fun too with the standouts being Deborah Foreman and Zach Galligan were really good in their roles. Great performances! I dug the soundtrack of Waxwork and overall the whole setting in the wax museum. I didn’t completely hate this movie, there are a lot of things that worked in this movie. The script was pretty clever, the dialogue sometimes got cheesy and lame but that worked for the fun factor of the film. This is not exactly a movie I’d take seriously but it did spark my interest. I just wish they did more with the intriguing concept, and scored more on the creepy factor. I also thought this movie was a love letter to zombie/vampire/werewolf movies and Hammer movies too.

Overall I recommend you to see Waxwork even if its just for once, its definitely a fun and cheesy 80s slasher/comedy with lots of jokes, blood and great characters. For the horror die hard fans its a must for the collection because I know some have an instant love for it, for regular film fans I’d say rent, check it on Netflix or watch it online. Its not everyone’s cup of tea.