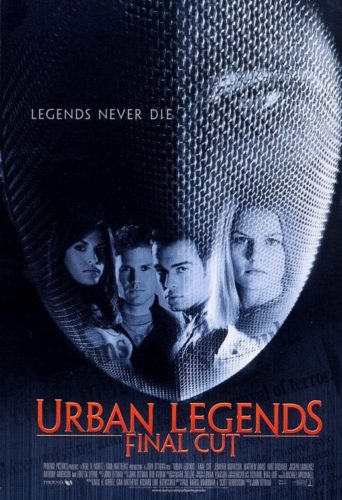 The slasher sequel Urban Legends: Final Cut follows the story of Amy (Jennifer Morrison, Once Upon A Time), a young film student who, after hearing the story of the events which took place in the first film, comes up with the idea to make a film based on Urban Legends. However, as the film begins shooting, a mysterious killer begins picking off Amyâ€™s cast and crew one by one. Amy soon realizes that her script has become reality and the horror isn’t staying on her script page.

I found this to actually be a very strong sequel, Although nowhere near as good as the first, it still manages to keep the eeriness of the first plus it has much bloodier kills. The acting, like the first, is pretty good mainly because you have relatively known actors such as Joey Lawrence (Blossom, Melissa and Joey), Eva Mendez (The Place Beyond the Pines) and Matthew Davis (Legally Blonde, The Vampire Diaries) adding their acting chops to this low budget sequel.

I found that this film had a lot more humor in it compared to the original. This made for a different tone in the film and separated it from its predecessor, which actually worked quite well in this sequel. The main thing for me which stuck out for the film was the fact that this one only received a 15 rating from the BBFC when the original was given an 18. It felt as though this one was much bloodier than the original. This got me thinking about horror films and their ratings, but also what goes into a film rating. After rewatching the first Urban Legend recently it crossed my mind that possibly the 18 was given for the threat more than actual on screen violence. For the most part many of the kills in the original were off screen.

Urban Legends Final Cut is possibly one of the better “recent” horror sequels. Although it has its connections to the first, it could be watched as a stand alone film. However, as a fan of the original, it is possible to imagine that many fans would possibly have liked to see or at least know what had happened to the characters in the first film. To be fair, in this sequel, they do try and pass the first film off as an Urban Legend story.

Overall I would highly recommend this film. As previously mentioned you do not have to watch the first to enjoy this film, although I do advice that you do as it is a great slasher film. Urban Legends: Final Cut is widely released on DVD and should be easy to get. In the UK it is also on Netflix.