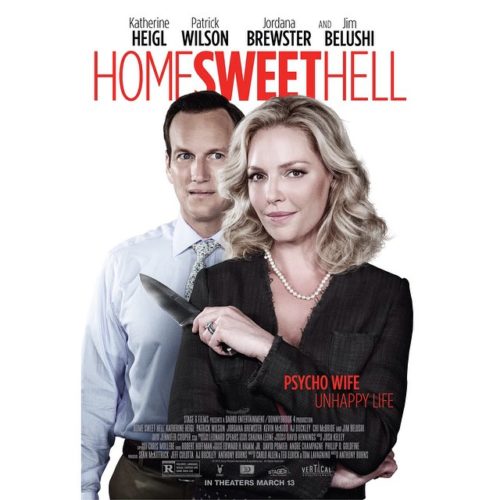 On Saturday I watched Home Sweet Hell (2015) for the first time. This was the latest DVD screener I received from my job to review. This movie came out direct to DVD and Blu-ray where I live. After having seen the trailer of Home Sweet Hell, my interest had definitely awoken. I heard mainly mixed things from others, but that didn’t hold me back to go watch it myself. Well I’ve watched Home Sweet Hell and I thought it was an entertaining dark comedy with brilliant tongue-in-cheek humor.

Katherine Heigl absolutely nailed her performance as obsessive, OCD and controlfreak Mona Champagne. Talk about a comeback, this role was clearly written for her and she did a brilliant job. The other actors did a fairly decent job themselves, Patrick Wilson and Jordana Brewster were at times overacting. The story isn’t really original in my opinion. Also, there was a lot more that could’ve been done with the concept than what we ended up seeing in the film. This movie makes it difficult for viewers to decide in which genre it belongs: comedy, horror or thriller? I wasn’t bored for a second while watching Home Sweet Hell and before you know the movie is over. There is also a surprising amount of blood and gore in Home Sweet Hell, which I loved.

The directing by Anthony Burns (Skateland) is solid. The movie is filled with twists and turns and the ending is nowhere near predictable. Home Sweet Hell is worth watching for Katherine Heigl’s excellent performance and the hilarious dark humor alone. Lots of memorable and clever one-liners in this movie. It has a lot of problems, obviously, but its a solid flick to watch on a Saturday night. I’d say its worth a rental, or if you’re a fan of one of the main actors: purchase the DVD/Blu-ray! Trust me, you could do a lot worse…