Black Mass of the Nazi Sex Wizard is the fourth installment of the Vomit Gore films. Directed by Lucifer Valentine, this film, unsurprisingly, still has the five elements from the first three films that made them work â€“ vomit, gore, satanic imagery, flashy editing, and sound design that is very atmospheric and harsh. But is this long-awaited fourth film good as its predecessors? Well, itâ€™s better than Slaughtered Vomit Dollsâ€¦

I would be lying if I said I enjoyed this film as much as ReGOREgitated Sacrifice and Slow Torture Puke Chamber. Those two films hold a special place in my heart because they didnâ€™t feel pretentious or just shock for shock value sake. I found them to be disturbing, gruesome, depressing, dark, and beautiful
in some sort of depraved way. They had this â€œdownfall of the dollâ€ aspect that made them interesting to watch since the characters (reincarnations of the main character in the first film) were beautiful and had these depressing and interesting monologues right before they were puked on and torn apart by Hank Skinny (who returned for this installment). Unfortunately, while this fourth film still has the self-destructive feel to it, I didnâ€™t like it as much as ReGORE and STPC. Something about it just didnâ€™t stick with me like those two movies. Donâ€™t get me wrong â€“ some things about it are great, but I was disappointed.

Pros:
The sound design was unsurprisingly amazing in this film. Even though I still hate the first Vomit Gore film, the sound design builds this eerie and hateful atmosphere that stayed for three more films. Itâ€™s harsh, angry, and awesome to listen to.

The clips of cartoons placed throughout menacing scenes of purging, satanic rituals, and abuse showed Lucifer Valentineâ€™s obsession with â€œchildlike innocenceâ€ and made it very uncomfortable to watch (which is a good thing). It just adds another layer of creepy and strange to this film which I liked. 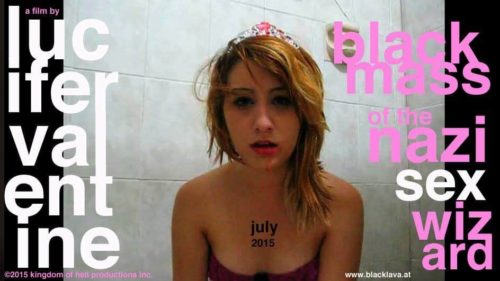 Cons:
Though this may just be nit-picking I didnâ€™t like how the aspect ratio kept changing between scenes. Unlike Lars Von Trierâ€™s Nymphomaniac, the aspect ratio shifts just felt like lazy unfixed editing instead of being artistic or symbolic.

The gore effects here also disappointed me. Though I wasnâ€™t expecting something on a Tom Savini level in a Lucifer Valentine film, the gore effects felt very lower budget and fake. Some effects were decent like a woman getting her face peeled off but at times it felt like not much effort was put into the effects. ReGOREgitated Sacrifice was definitely higher budget than this entry with the effects. Though the effects here werenâ€™t awful, I expected more.

Final Verdict: Black Mass of the Nazi Sex Wizard is a mixed bag. It still has the dark atmosphere from the first three movies and it still has a lot of gore and depraved imagery but I canâ€™t see myself watching this ever again unless LV makes another one and I want to have a marathon. I canâ€™t really see this movie making waves either unlike the sequels. Though I have seen some talk about it outside of Lucifer Valentine fan groups, I feel like some underground horror films will overshadow it and only the Lucifer Valentine fans will see it. Unlike the first three which are still reviewed and talked/trashed about by non-LV fans, the fact that this came out years later than it should have will lower any kind of impact this movie will have. 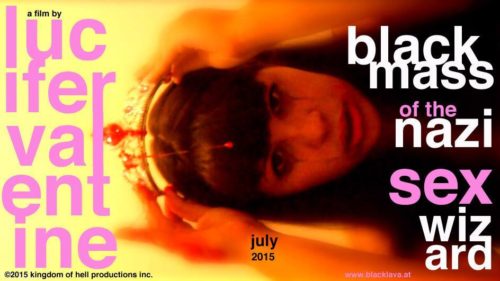