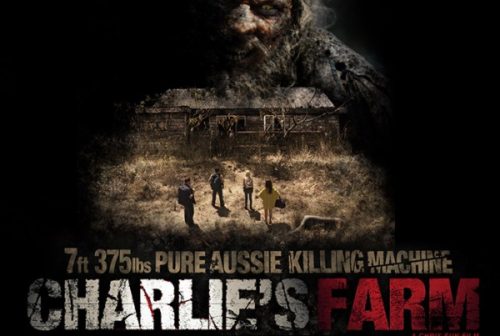 Charlieâ€™s Farm is a new Australian slasher movie staring Tara Reid (Sharknado, Urban Legend) and Kane Hodder (Hatchet trilogy). The film follows a group of friends who go on a camping trip to the Australian outback. On the trip, they are in search of the house where a family of sadistic murderers were killed by locals. Known as “Charlieâ€™s Farm,” there are many that believe Charlie is still alive and will kill anyone who dare to enter his land.

Going into this film, I tried to keep an open mind. While Sharknado was a hit, Tara Reid hasn’t exactly had the greatest career as of lately. Shockingly though, I found myself being wildly entertained by this film. I was so happy when the film actually turned out to be really good.

Donâ€™t get me wrong, it wasnâ€™t the best film ever made by any standard. However, for what it was and for what it was trying to, I found it to be a pretty decent effort. The acting was okay, decent enough, for this type of film. Though I think the Australian actors were far better than Tara Reid’s performance.

I felt that he gore was the strongest element in this film. The kills were very violent and will please all of you gore hounds out there. After experiencing many Aussie horror flicks, it has come to my attention that most of them don’t exactly end well for the characters. Not to spoil anything but this film was pretty damn dark at times.

This film is definitely worth checking out for those of you who enjoy the old classics of the 70s and 80s. It really had an 80s slasher vibe going on and a lot of it really reminded me of Wolf Creek (2005) I felt that it was filmed very similarly to All The Boys Love Mandy Lane (2006) which also had a retro vibe to it. Overall I highly recommend this. Itâ€™s not for everyone but it certainly shocked me.