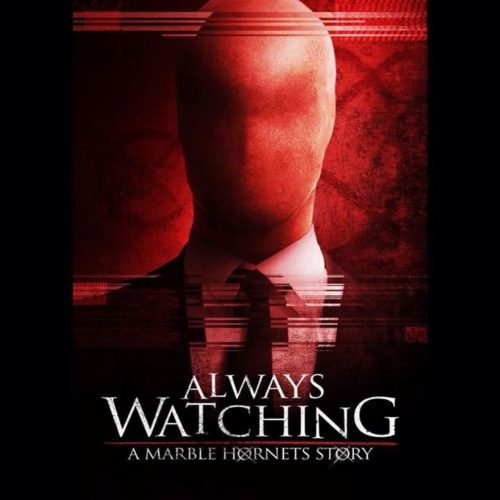 Last Friday I watched Always Watching: A Marble Hornets Story (2015) aka The Operator (2015) for the first time. This was the latest DVD screener I received from my job to review. Never heard of this movie before and I’m not familiar in the slightest with the web series ‘Marble Hornets’, which this movie is based on.

Well I’ve given Always Watching: A Marble Hornets Story a watch and ,as I could’ve predicted, it was downright awful. The story is unoriginal and in some ways it even felt like a rip-off of Paranormal Activity and The Devil Inside. The movie is never scary and only features your typical dose of cheap jump scares, just like you’ve seen them a thousand times before. The shaky cam aspect and the sound effects were annoying and gave me a headache. The acting performances by the three leads were okay at best, but I didn’t notice any familiar faces. I admit that this movie had plenty of build up, but the ending basically ruined everything for me. Also worth mentioning is the lack of Slender Man in this movie, there isn’t really anything scary about this figure in my opinion. When he’s finally on screen, there is hardly any tension where there was so much opportunity for it.

It’s good that I’m not familiar with Marble Hornets, because after watching this crappy movie I intend to keep it that way. I suggest you avoid this movie at all costs. One of the worst found footage films I’ve ever seen, period.