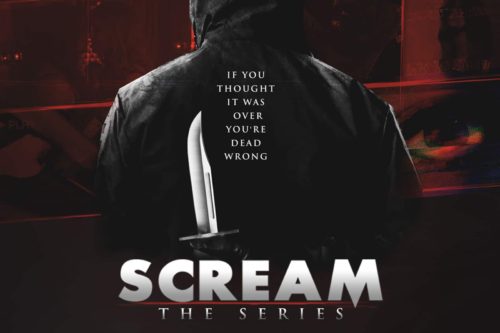 The night that everyone has been waiting for has finally arrived. After nine episodes of mystery and death, the season one finale of MTVâ€™s Scream has arrived. Let me start off by saying that MTV needs to really learn what a tribute is to somebody. The tribute they paid to Wes Craven was a joke. This show would not have existed had it not been for him and all he gets is a â€œThanks for the screams!â€ They could have tweeted that.

Anyway rant done. Keep in mind Iâ€™m going to try be as spoiler free as possible. So, with the Pilot episode we are given the urban legend of one, Brandon James, the town psychopath. The killer shows up wearing the same mask as Brandon and ensues havoc on the town of Lakewood. The first victim is the high school slut/bitch. We also get a taste of voyeurism that plays a theme during the season. For the most part, it does a good job of building up the mystery and who is committing these murders. And for an MTV series, it delivered some pretty fine and gory death scenes. One thing that did please me is that amount of nods/homages to moments from the original film series and managing to make them their own in a fine light. And while we are given a couple of chase scenes (and a decent ones), though very brief, but sometimes we gotta take what we can get. Unfortunately during the course of the series, the deaths come to a halt and leave us horror hounds with nothing. And when we are, itâ€™s more often someone we really donâ€™t give two shits about. On top of this, and what really brought it down, was the amount of pointless drama that served no purpose whatsoever. An example being a plotline involving Brookeâ€™s (Carlson Young) mother. Some can argue it served as a purpose to shape her character (fair enough), but in the grand spectrum of things, it didnâ€™t do anything for the story (if this was longer than ten episodes I would have given up and waited for the finale).

That being said, I tried to have hope that this would all build to a great finale episode. For the most part, the finale had MANY great scenes, and some very thrilling ones that take place at Brookeâ€™s house once the killer crashes the party. But by the end, I was very disappointed. If the killer wasnâ€™t predictable during the latter half of the season, the finale beats you over the head with it to where only the dumbest person (or the most uneducated horror fan ever) wouldnâ€™t be able to see it. That being said, the performance given by the actor during the reveal was pretty solid (though very familiar to Emma Robertsâ€™ in Scream 4). As for the motive, it went for the most tired one possible (another familiar one). Of course our leading lady Emma (Willa Fitzgerald) gets into a literal fight to the death with the killer, Fitzgerald turns in her better performance of the season here. The showdown is engaging for sure (some may say comical), but I loved that they were going all out with it, but unfortunately it was short lived (I wanted more). It all ends with a disgustingly happy ending, but also one final twist (gets a small nod of approval) for next season.

During the course of the season we have our main sets of characters. Some we genuinely grew to like and lost too soon, some we thought â€œfinallyâ€, and some we just didnâ€™t care about because they werenâ€™t important. Some characters even had way too many close calls to death and always conveniently got away (not gonna lie this pissed me off). From the beginning I always liked Emma and Willaâ€™s performance, the only downside was that the character didnâ€™t get a great amount to do a majority of the time. The finale made me enjoy the character and performance even more. Upon introduction I didnâ€™t care for the character of Audrey (Bex Taylor-Klaus), I saw her as very pitiful â€œwoe is meâ€ type. But she grew out of that fast and quickly grew on me as she showed more of her personality. She had some of the best lines of the season. Along with Audrey was her best friend Noah (John Carna) I liked this character from the start as well as the horror fanatic. But I can see why some got annoyed by him. Admittedly there were moments where his quirky lines got old (especially in the finale) but I still liked him enough. As for the other characters, my feelings towards them didnâ€™t change.

Contrary to how most people feel, I couldnâ€™t stand the character of Brooke or Carlson Youngâ€™s acting throughout. Donâ€™t get me wrong, I enjoy a good bitch in a horror, but Brooke wasnâ€™t even a bitch after the first two episodes, she was more of a whiny, self-involved brat. I was hoping Young would at least step up her game to try deliver a good performance, but I could only tolerate bad crying and weak line delivery so much. Donâ€™t get me started on her squawk (I mean scream). Call me bias or a hater if you want, but the character, nor the actress did anything for me. Neither did Tom Madden as Jake (what was his point?). The rest of the cast did okay at best but the above were the only ones worth mentioning. With all of this being said and combining the story with the characters, one would think that we would get a blood bath in the finale, right? WRONG! We are only given two deaths in the finale, and neither are people we cared about (I honestly mean this), there might as well have been no deaths at all. As a massive horror (especially slasher) fan, I spent nine episodes, a majority of them kill free, to see shit go down and characters die (whether I liked them or not), and this is what I got. A handful of survivors. This to me made this whole season pointless. Instead of being true to slasher form, it decided to focus on bad teen drama with Scooby Doo exploring. They may have saved these characters for season two, but regardless there were WAY too many survivors than there needed to be. Again, this made the whole season pointless and more of a drama than a horror/slasher show.

If you are a massive slasher fan expecting horror and carnage, you will be disappointed. If you are a young teen with a low IQ and no knowledge of the horror genre whatsoever, you may just love it. Some may find even ground in it and like it. As for me, this was a huge slap in the face as a slasher fan and overall left a bad taste in my mouth and unsure whether to tune into season two. Despite some fine performances and characters, great nods to the original films, nice deaths (from what there was), and some thrilling moments, MTVâ€™s Scream was basically Pretty Little Liars with actually bloody kills in it. Overall, I say pass on this one and watch My Super Psycho Sweet 16 instead. You get what this whole season had, plus a pleasuring amount more in 90 minutes.