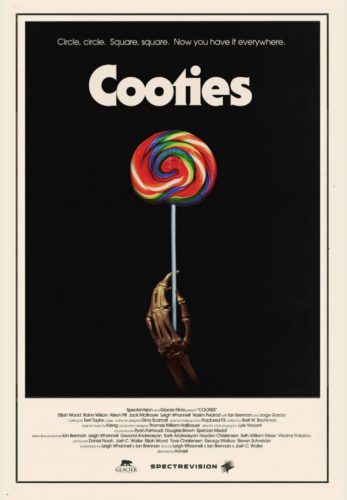 When a down on his luck writer named Clint (Elijah Wood), moves back to his hometown, he thinks he’s hit a huge slump. He accepts a substitute teaching job at the local elementary school for extra cash. It is there that he crosses paths with his high school crush Lucy (Alison Pill), and her confrontational boyfriend Wade (Rainn Wilson), as well as the vicious children that attend the school. As if the day hasn’t already started off as a disaster, the children become infected by a virus that turn them even more vicious and hungry for flesh. Clint and the remaining faulty members must ban together to escape the school and fight against the growing swarm of little monsters.

Cooties is the latest horror-comedy that manages to successfully do its job. It can be considered a semi-parody of Dawn of the Dead by having it take place in the school and the zombies being the children. The film runs at just under 90 minutes, and in turn moves at a very quick pace. Although sometimes too quick, but not too often. We are introduced to our characters in a timely matter right before the major chaos takes place (around the 15 minute mark). When the events do unfold we are given plenty of time to know the characters, who for the most part are very entertaining and likable. The laughs are present throughout the whole film, one moment that really had me going involves a zombie attack and the characters acknowledging a faculty member they had no idea who they were (true to life right?). Of course there are occasional raunchy jokes, but more often than not the laughs are very genuine and actually involve the interactions of the characters themselves and combining their personalities. So in the comedy department it massively succeeds. When it comes to the horror, it very much delivers everything you want from a zombie film, vicious and bloody kills, and a different take on zombies. It even features some pretty dark and mean spirited humor that contributes well to the horror of it. While it definitely delivers as far as laughs and horror, the film unfortunately moves a bit too fast towards the end, when it was over I felt like it was unfinished in the respect that they could have done so much more to lengthen it. Even if it was setting itself up for a sequel, it didn’t work with the way they did it. When it does reach the final act and things speed up, it also at the same time loses the momentum it had by having constant entertainment.

As far as the cast goes, they all do an incredible job. Elijah Wood shows just how well he can do comedy, and he plays almost the same character he did in The Faculty, but with much a lot of humor. He’s the unlikely hero that doesn’t exactly rise to victory, but comes off as a real person thrust into a situation he has no idea how to really handle. Rainn Wilson of course is hilarious as the gym teacher who is basically his character from The Office but amped up much more. Alison Pill also provides some good comedic moments as the quirky and free-spirited love interest of Wood’s character. Finally there is Leigh Whannell (known for his Saw and Insidious fame), who plays the nerdy science teacher and massively impresses in comedy territory after stepping out of the straight up horror genre, leaving me personally wanting to see him do more comedy films in the future. In general, the cast all has great chemistry and play off of each other really well and easily show they’re having a fun time filming.

Cooties is easily the best horror-comedy I’ve seen in a long time. It unfortunately didn’t get the same release platform as Zombieland (which I would easily rank Cooties up there with), but I hope it finds a strong cult following in time. It provides everything a horror comedy should. Big laughs, great story, gory kills, and solid cast and characters. While it does move too fast for its own good in the end, it’s still a great way to spend an hour and half.

Cooties is playing in limited theaters and can be rented on iTunes.