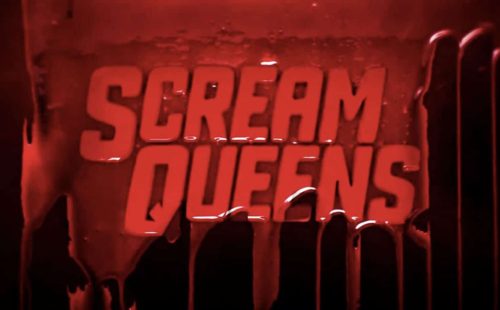 During the night of partying at the Kappa sorority house, the fun is cut short by the death of one of the sisters, leaving behind the child she just birthed. Flash forward to present time when it is time for Kappa to select new pledges. This time Kappa is ruled by the feisty and vicious Chanel (Emma Roberts). She, along with her henchwomen, Chanel #2 (Ariana Grande), Chanel #3 (Billie Lourd), and Chanel #5 (Abigail Breslin). However, Dean Munsch (Jamie Lee Curtis) is putting her foot down, disgusted by the behavior of the sorority, she enforces Chanel to accept ANY pledge. Enter our main girl Grace (Skyler Samuels), who plans to join the sorority in hopes gaining some closeness to the mother she never met. Grace, along with her roommate Zayday (Keke Palmer), plus other pledges begin their hell week. But someone is bringing a new meaning to the term. A killer dressed as the school mascot the Red Devil has a score to settle with the Kappa sorority, and everyone is a target.

Following the Scream tv series, we get the heavily promoted new show from Ryan Murphy. In its first night, we were treated to a two hour long premiere. And what a hell of a fun two hours it was. Scream Queens has the meta aspects of Scream, the parody of Scary Movie, and the teen flare of Heathers and Mean Girls. Both of the two episodes were very self aware of itself in the situation the characters find themselves in and how it fits into horror scenarios, but it doesnâ€™t beat you over the head with it. The dialogue is extremely witty and entertaining, and features many horror feats that leave it pretty clear that Murphy has done his homework. Along with this we get very creative kills (let me just say we had just about the same amount of kills in this premiere that Scream had in the whole season). This doesnâ€™t ruin things for it though since we are left we plenty of characters who can still bite it. Itâ€™s also a show that could easily get away with having an episode or two without a kill because it wonâ€™t focus on pointless drama. Let it be known that this is a straight up horror-comedy. Anything you may find â€œstupidâ€ about it was there for a purpose. While the kills were very solid, it is the dialogue that really sells the show. The dialogue written for the characters fits them so well and the actors portraying them have their characters pegged. Given with how much we received in these first two episodes, itâ€™s very clear we are in for a treat. Iâ€™m expecting even more great kills, some pretty good twists, and most of all, the fact that everyone at this point is fair game.

As far as the cast goes, they all do a tremendous job. The biggest shout outs go to Emma Roberts who (as displayed on American Horror Story: Coven), nails the role of the bitch. But this time around it is much more amped up compared to her character Madison on AHS. She encompasses the nastiness and snarkiness of Jessica in Sorority Row, and the over-the-top bitchiness and overreactions of Regina George in Mean Girls. There really isnâ€™t anyone who could have done the part better than Roberts. Everything that comes out of her mouth had me laughing like a maniac. Next there is Niecy Nash as the campus security guard Denise. Nash gets the next amount of laughs following Roberts. While Nash does get her over-the-top moments, she really is the voice of reason of all the characters. She knows when someone is doing something stupid, calls them out on it, and knows when to haul ass. She gets just as many great one-liners as well.

Finally, there is the incredible Jamie Lee Curtis. Every horror fan knows her as the innocent victim Laurie Strode, but on Scream Queens, Curtis is essentially the anti-Laurie Strode. Sheâ€™s a hard core bitch who smokes pot and sleeps around with students. Overall itâ€™s a side of Jamie Lee we havenâ€™t seen in general. And of course she nails the role to the point where you can hardly believe this was once shy and virginal Laurie, but you canâ€™t wait to see what the character and Curtis has left up her sleeve. Skyler Samuels is also worth noting as our main girl. Essentially sheâ€™s the basic heroine we expect. The kind-hearted, innocent, awkward girl. And thatâ€™s it. Not really anything special, just your cardboard cut out final girl. I personally didnâ€™t care for her for that reason, if she had more of an edge to her, Iâ€™d like her more. But overall, sheâ€™s not unlikable either, and Samuel does bring some realism to the role and some likability despite my sentiments about the character overall. Keke Palmer provides some sass as Graceâ€™s roommate. While Palmer does deliver some comical lines, you do get the stereotypical black girl behavior that is eye-roll worthy. We are also treated to Lea Michele as the backbraced Hester. Initially sheâ€™s the dork who more or less keeps to herself with occasional mumbling to herself as well. But then we see she knows a thing or two about murder. And how to hide a body. Unlike the annoying character she played on Glee, Michele has more to work with. She can go off on a crazy girl rant, but then switch into this childlike innocence in a flash. The rest of the cast does a good job, but nothing really stand out yet. However there is still time.

Scream Queens is the slasher show that the subgenre needed. It brings a breath of fresh air by trying to relive the days of Scream and classic teen hits. And it succeeds through and through. This is thanks to massively engaging characters and dialogue, an excellent mystery/whodunit, and very clever kills. Ryan Murphy has struck gold more than ever with this in his writing in the perfect blend of horror and comedy. And with the talented cast behind this with their excellent performances thus far, I can only imagine it getting better from here-on-out.