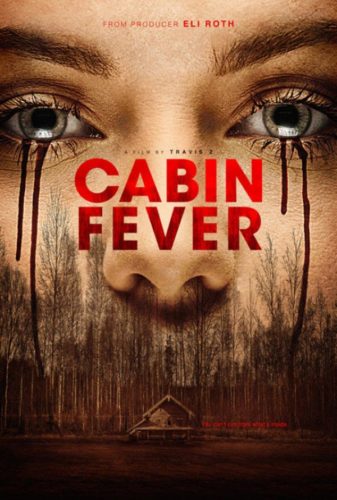 A group of friends go away on a camping trip in the woods and stay in a remote cabin. The locals immediately weird the group out but also warning them that people who have gone into the woods have gotten ill. Brushing off their advice, the friends continue on. Things start out fine, but when a stranger appears with a flesh-eating virus, it isnâ€™t long before the friends start catching it themselves.

This remake of the Eli Roth film (from way back in 2002), is based off of the exact same script. No joke. Everything plays out exactly the same way except for a few circumstantial changes, the last scene, and an unnecessary scene in the credits. Oh and Officer Winston is now a female who resembles a porn star and is pretty much a lesbian. In general this is just a very piss poor movie altogether. The acting is purely awful, with the actors clearly trying way too hard to â€œactâ€. Along with this, the characters have zero substance or any particular qualities that make them unique. Thus resulting in us not caring about them at all. Itâ€™s not even that theyâ€™re unlikable. (except for maybe Bert, who is just straight up annoying), itâ€™s just that there is nothing to them worth caring about.

On top of this, there is zero tension or suspense, there is an attempt to do this with the music, but it is so laughably cheesy. The gore effects range from awful to mediocre, some of the prosthetics involved are so damn obvious it seems like they werenâ€™t even trying. The one thing I will give this is that it was decently-filmed. So in this respect itâ€™s clear where a lot of the money went towards with this film. It also takes itself way too seriously, whereas the original perfectly captured the terror while adding some good dark comedy.

Not only is this one of the worst horror films Iâ€™ve seen in my life, but it is hands down the worst remake Iâ€™ve seen. Horrible acting, poorly-written characters, bad music, and extremely cheap effects makes you wonder just what the hell they were thinking remaking such a good cult classic. Most remakes at least try to be better than its predecessor, but this doesnâ€™t try at all. If anything this is more of a cheap fan remake that is best left unseen.