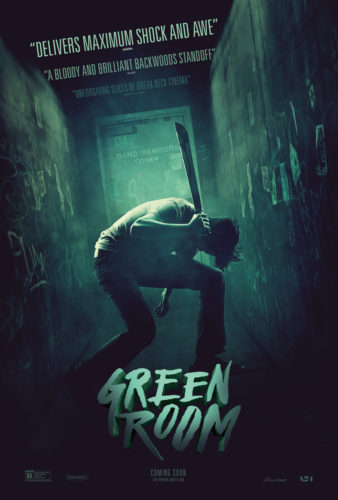 When a down-on-their-luck band called The Ain’t Rights are struggling on a tour for a good gig. One finally comes to them at a run-down bar inhabited by Skinheads. Uneasy about the setting, the group give it their all and call it a day. Just when they think they are done, they stumble across a murder and soon find themselves mixed up in the deadly gang and must fight to survive the night.

Green Room is the latest indie horror film from A24 who brought the surprise hit The Witch earlier this year. This film isn’t as subtle as the horror The Witch depicted, this one is totally and completely in your face. At the start, the film may seem like it’s gonna be slow moving as it introduces the characters and setting everything up. However, once things get set in motion, it is complete intensity throughout the rest of the film. I would go as far to say it moved at an intense speed. Not in a way where it rushed itself but in a way where things just keep on happening and happening so there is never a dull moment. I wouldn’t call this film scary, but it is definitely intense in the sense that you have no idea what is going to happen or just who and when someone will die, and when they do, the deaths are pretty damn brutal. One scene in particular involves the characters running off in different directions and you find yourself on edge and not knowing how each character’s fate will end. I will say that at the end of the film I was slightly let down in the sense that I wanted it to have more of a climactic ending. Instead it was kinda dull and lifeless compared to everything else that had just happened.

The story is fairly basic but it takes its material and amps it up to keep you engaged, though there were several times where I found myself constantly questioning actions and motives, more so on the end of the villains. That is definitely something that could have been handled better. But the one thing that really infuriated me the most happens near the end when a character essentially makes a decision that makes you literally hate them because of the fate it causes for another character. As far as the characters, most of them are likable and you get genuinely worried whether they’ll die or not. The band as a whole are likable in that they have great chemistry together. Though I’m not sure if their music is something that was supposed to come off bad or not. The one character however that did not leave much of an impression on me was the character Amber, her character had no real personality or redeemable traits, she was essentially just there to be the love interest for the character Pat. A very unnecessary character. Had it just been the band as the focus, it would have made it a lot better.

The acting was solid all around. Each actor really brings a sense of personality and charisma to their characters. Alia Shawkat plays the lone female in the band with sass and wit, but also shows she does have a soft side. Joe Cole and Callum Turner play their characters as tough, caring, and often humorous. Anton Yelchin, is the semi-weak one of the group. His performance isn’t bad, but it’s very one-note and no different than any other role he’s ever done. Imogen Poots turns in yet another unbearable performance as Amber. The character herself was downright boring as I mentioned, but Poots could have at least tried to spice her up, instead she just brings in a dull and lifeless performance, she genuinely seems bored throughout the whole thing. Finally there is Patrick Stewart as the head honcho Skinhead, Darcy. If there was one thing I was looking forward to about this, it was to see Professor X himself play a twisted villain. Sadly, I was disappointed. Not with Patrick’s performance, but with little they did with him. They could have made him much more villainous than they did.

Green Room is an intense ride overall with pretty solid performances, but despite a couple of questionable moments with the writing and the characters, and just an under-use of the actors, it’s a film I definitely recommend. 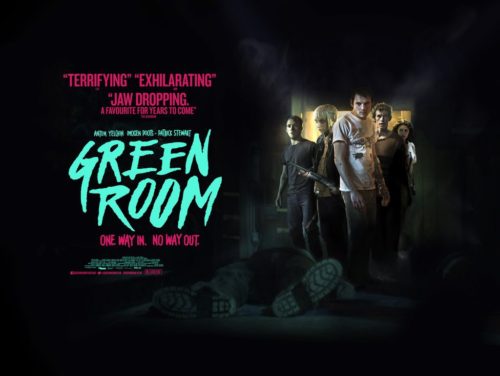 The new horror film “Green Room” follows an underground indie rock band who are struggling to get gigs. When one comes up in a rough and tough bar, they have no option but to take it for the money. But, this harmless gig turns deadly when a member of the band is witness to a murder, leading to the band having to fight for survival against sadistic thugs with guns. With only 1 gun and 5 bullets, the group need to think fast on their feet if they want to even try and escape. But, not every escape leads to survival.

“Green Room” is a stunningly made thriller with a pretty simple plot, but the simple plot does not mean the film is not good. In fact, it works in the films favor. The film certainly does not shy away from gore either. Although the UK version is slightly cut from previous festival screenings, it does not take anything away from the thrills this film dishes up.
There were some scenes in the film that were pretty hard to watch, and for many people this was one of the most disturbing films they have ever seen. I have to agree to an extent. I found the film gripping and rough, but it was such a great watch and I couldn’t take my eyes off the screen for a second. Even at the toughest parts, I was still hooked.

Suspense, tension, action and gore is everything a horror/thriller fan could ask for. Although not overly gory, the film does, in a realistic way, have a decent amount of gore. However it is the acting which is the strongest point in the film. Everyone does a superb job and, not only that, you believe that this is actually happening to them.

There is a green tint throughout the film that really heightens the tension and atmosphere to a nail biting point, almost giving the film a nightmarish feel.

This is without a doubt one of the best horror films I have seen in a long time. From start to finish, it was thrill after thrill with no mercy. The acting was superb from all involved. Everyone stood out, but there were no real scenes where I felt someone stood out over another. They all played their roles well and I think in this kind of film that is what you need.

Overall, there is really nothing negative I can say about this film, though a very small couple of things a few audience members at the screening were debating whether the film had been cut from previous festival screenings. If there was a problem in the film, I would say it was that there were scattered comedic moments that felt very out of place in the film. Nonetheless, it didn’t take anything away from the film overall.

In the end, I would say go and see this film as it is a hell of a good time. Be warned, this is not a film for the faint of heart having received an 18 rating in the UK.