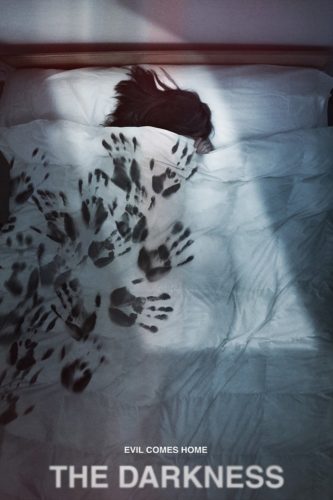 A suburban family takes a vacation in the canyons, but while they are there, the couple’s young autistic son takes some marked rocks from an underground cavern. Upon their returns, things begin to take a haunting turn, and their son’s behavior soon begins to intensify. They learn that something was brought back with them, and they want to take something back themselves.

After seeing the other supernatural film this year called The Other Side of the Door, I didn’t think there could be a horror movie that would be any worse than that one. I couldn’t have been more wrong. That one actually appears good compared to this film. That film had every single cliche in a supernatural film that you think of. The Darkness does this too but it doesn’t try to make an effort to even try do something with those cliches. The jump scares were painfully bad in that they were either the same thing, or just entirely unscary whatsoever. There is no sense of creepy atmosphere either. Not to mention the film is just totally and completely boring that I was growing depressed and irritated that it wasn’t over yet. Never before have I wanted a movie to end so badly until this one. In an effort to try get viewers to become engaged with the story, they try to make us feel sorry for the family by making the father absent and blind to the family’s problems (oh and of course he had an affair), the wife moping around babysitting her autistic kid while turning to the booze to feel better about her life and not being believed about the haunting occurrences, the autistic kid who is a pain in the ass who should have been kept on a leash, and then there’s of course the bitchy teenage daughter who has bulimia.

If this was supposed to make us feel sorry for them, they were trying way too hard. Not to mention many of these issues are casually swept under the rug at one point and the film tries to pretend it never happened. On top of that, the characters are just unlikable in general to where you could care less about them. It doesn’t help that the story is horribly written to where there’s just no development for the family and their world. It literally starts out with them vacationing, kid finds the rocks, and then boom the stuff begins to happen. Along with this, the pacing and the editing just felt off in the sense where scenes that follow each other just don’t match up, and they were throwing in random moments to clearly establish that we should feel sorry for the family.

It’s literally in your face but we never get a good picture of the family in general. Anyway, the family junk aside, the horror is just non-existent. There’s nothing scary about lights burning out and random animals appearing. For a film about spirits, there are no spirits around at all. It’s just small junk happening. And even when the family turns to Google and an old Mexican lady for help, it does a horrible job of explaining this tribe (or whatever they were) that was haunting them. Unless I’m just slow and didn’t understand it, the mythology was just incoherent. And the final scene in the movie was just gag-worthy.

With two talented actors such as Kevin Bacon and Radha Mitchell, you would think they could at least save the movie. Sadly this does not happen. Bacon clearly wanted a paycheck, and it sure as hell shows. Mitchell surprisingly tries to work with the script, but it still feels half-assed. And the two actors who play the kids are unbearable, especially the teenage daughter. And seriously, you put Jennifer Morrison in the film (fricken Emma Swan from Once Upon a Time!!!) and you only give her five minutes max of screen time in a meaningless role? What the hell??

I wish there was something positive I could say about this film, since I usually do find at least one thing good, but unfortunately I can’t. Okay, the beginning scene in the canyons was pretty. Done. Just plain and simple, don’t ever see this movie. Whatever movie you consider the worst movie you ever seen is, just watch that instead.