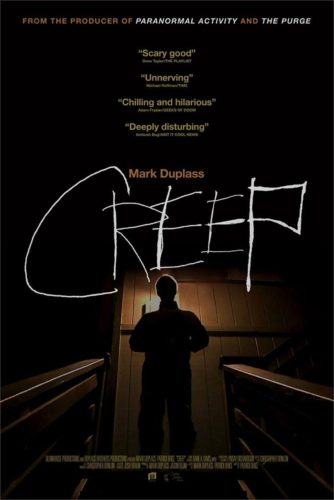 On Friday night I watched “Creep (2014)” on Netflix for the first time. This movie is directed by Patrick Brice (The Overnight). The cast includes Mark Duplass (The League) and Patrick Brice. Brice and Duplass also wrote the screenplay for the movie together. Jason Blum served as co-producer through his BH Tilt division. Creep received a glowing reception from critics and most horror fans alike. It’s a good thing that I managed to avoid watching a trailer for this movie beforehand. After finishing Creep I can definitely agree with the general consensus.

This movie came such a long way with a simple premise. I’ve honestly grown a little tired of the “found footage” subgenre over the past couple of years, but this aspect didn’t bother me at all while watching Creep. The acting performances are great. Mark Duplass and Patrick Brice work wonders with their self-written characters. It also doesn’t hurt that both men are super easy on the eyes. There are plenty of suspenseful moments throughout the movie, but there’s also a surprising amount of comedy hidden in the core. That “Peachfuzz” mask was sheer genius and became ironically iconic. The ending came out of nowhere and left me in a state of shock.

This movie could have benefited from a longer running time and a better motive for our villain. I often wondered what his real story was and what actually happened to him that justified his actions. This movie feels like an experiment that succeeded for most part and I think this was purposely the original idea from the makers. Which brings me to the following good news: Creep is officially becoming a trilogy with two more sequels on the way from Duplass/Brice! I’m curious to see where they’ll take the story, but I’m definitely excited about the news. Creep makes for a clever, creepy and unique viewing experience that isn’t entirely flawless – but is truly a cut above recent found-footage outings. I highly recommend going into this movie as fresh as possible. I might plan on importing the DVD from the United States in the near future – especially for the special features. Check this out on Netflix – if you have a subscription of course!