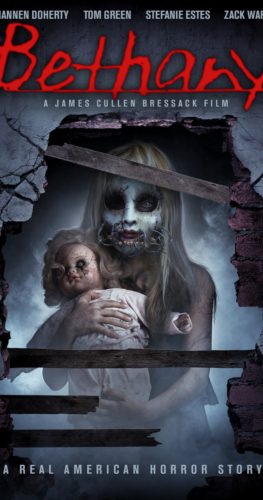 After the death of her mother, Claire and her husband move in to Claireâ€™s childhood home. Claire then begins to have haunting flashbacks to her abusive mother who is hell-bent on making her a beauty queen like she was. Not only that but she also finds herself being haunted by her imaginary friend from when she was a child.

Bethany plays essentially the same way as any other â€œghost childâ€ movie. But at the same time, it was interesting to have Claire being haunted by two different things, and by the end the two ultimately become connected. That said, the moment when that happens, the reveal isnâ€™t entirely surprising, but itâ€™s good for the story, though the final scene plays out essentially like the ending of this yearâ€™s Rings. And in all honesty, the reveal is kind of disturbing. There isnâ€™t much thatâ€™s suspenseful or terrifying about this one, but it does put in a decent effort to try and give it a spooky atmosphere. It also has some interesting â€œbody horrorâ€ moments that donâ€™t get too grotesque but are still enough to be cringe-worthy even if some of the CGI pretty evident. If there are any moments where the CGI isnâ€™t very pretty itâ€™s moments involving the ghost.

For the most part, Claire is a likeable lead, sheâ€™s not great, but itâ€™s better to have her trauma be something like this instead of the typical â€œdeath of a childâ€ clichÃ©. Though I do question why she would care that much about her mom or the house after the hell she put her through. And as far as the husband goes, heâ€™s good-hearted, but heâ€™s also very annoying with his constant use of â€œbabyâ€, â€œsweetieâ€, â€œhoneyâ€, etc. The acting from Stefanie Estes does a good job as Claire, and she captures the trauma and pain Claire is going through pretty well. Her husband is played by Zack Ward (the bully from A Christmas Story), and for the role, heâ€™s not really outstanding, but he plays the caring and supportive husband party well-enough. But then we have the two big names of Tom Green and Shannon Doherty. Tom Green is barely recognizable as Claireâ€™s shrink; and honestly, thereâ€™s just not much to say about him here. Itâ€™s a super basic role that didnâ€™t require much, similar to Wardâ€™s role. Doherty plays Claireâ€™s crazy mom, and while itâ€™s not a bad performance, I could feel like she wasnâ€™t really giving it her all. From the small glimpses we got, I could see that she could knocked it out of the park as a psycho mom, but it seems like she was holding back.

Bethany is pretty by the numbers, but for what it is, itâ€™s a decent enough watch. What I would praise it about it is the use of the two evils and how they come together in the end and I liked what they did with that, even if the outcome isnâ€™t particularly new or original.