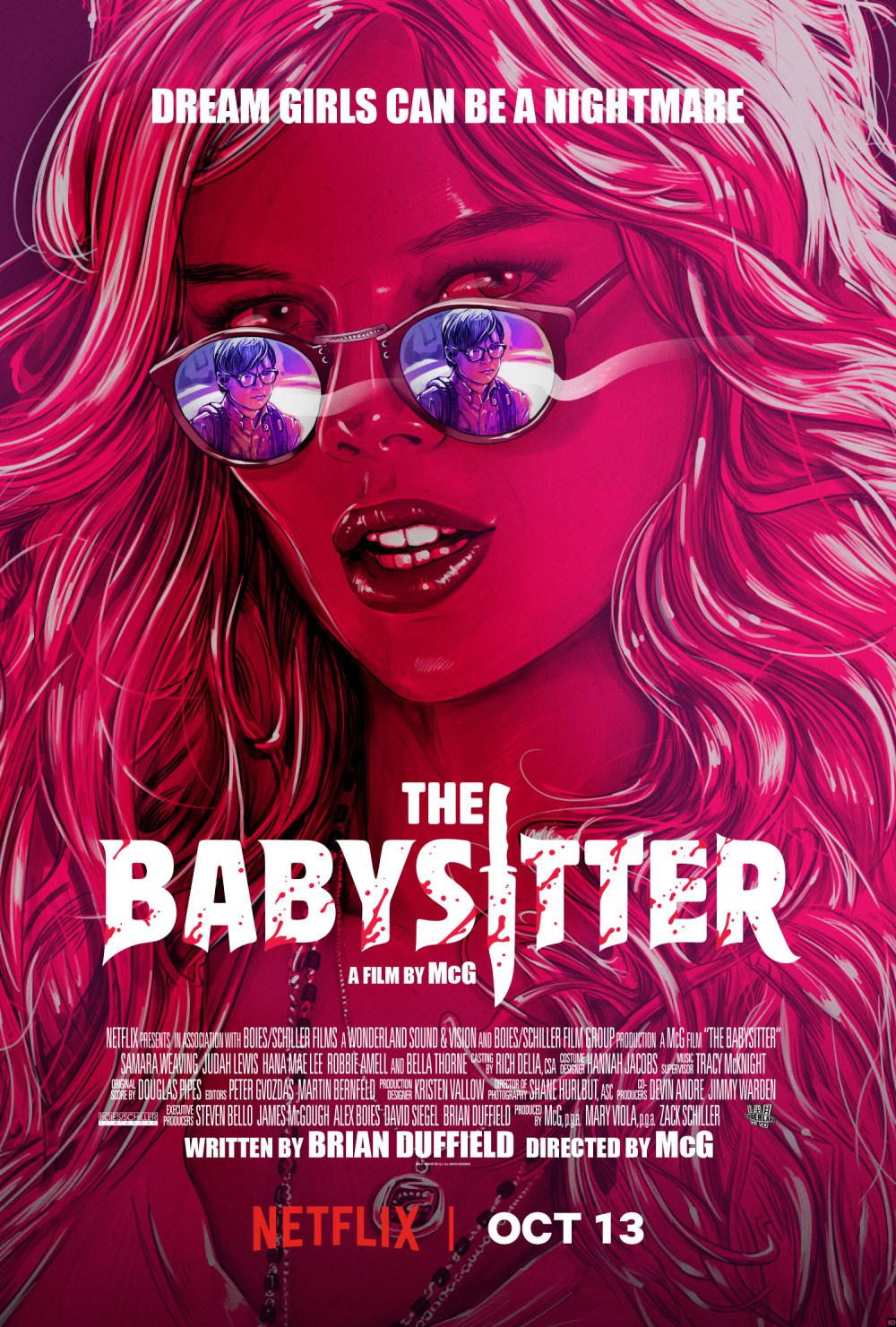 12-year-old Cole, is being babysat by his sexy babysitter Bee, whom he clearly has a crush on, while his parents are gone for the weekend. Cole is bullied in school and Bee is clearly the one he chooses to confide in and turn to over his best friend Melanie. During the night, Cole wakes up to find Bee has invited over a few guests, but to his horror he sees that they are part of some twisted cult. Now Cole must go up against this group and survive the night.

I went in watching The Babysitter with some lower expectations, but to my surprise, I ended up loving every minute of it. The movie is a blast and entertaining from beginning to end. When it comes to horror, it has some pretty suspenseful scenes, but it also massively delivers some great comedy, especially some great dark humor scattered throughout. You hardcore root for Cole throughout the film, and itâ€™s also great watching him grow from this shy, nerdy kid to this bad ass. Even before his big transition heâ€™s a pretty smart and clever kid. The scenes between him and Bee are charming and you like their relationship. Even Coleâ€™s relationship with Melanie (while kind of underdeveloped) still feels and comes off as interactions and conversations of 12-year-olds. The movie does move at quite a brisk pace, so there are some things that can seem undeveloped, like the young cult members for example. But from what we do have of them, we do get a sense of their personas, and each one is pretty unique, but regardless, theyâ€™re pretty horrible people, so you love seeing them getting their just deserts. It also serves as a fun retro, throwback film in terms of the cheesiness it presents, it even has pop up words indicating character thoughts or actions, but it doesnâ€™t bombard the film with it.

The director McG, has always been known for having stylistic films, and that is still present here. He gives us a great vision for the story he wants to tell and is a huge factor in keeping the viewer engrossed. Surprisingly, there is a good amount of heart to it with itâ€™s coming-of-age/growing up story, and there is even a couple of pretty sentimental moments towards the end. The cast does an incredible job, especially newcomer Judah Lewis as Cole, he totally carries the film and offers plenty of charm, wit, and laughs, while also really making you root for him. Samara Weaving also turns in a solid performance as the titular character. Weaving has a way of making you fall for her the same way Cole does, but she also rocks the villain role in how she can give the perfect icey/devilish looks. Also worth noting is Robbie Amell as the football stud of the cult and really sells the role of the douchebag jock, but also kicks ass as the more psychotic one of the group. But I was definitely surprised with Bella Throne, apart from The Duff, this is the only other role where I wasnâ€™t cringing at her performance for how bad of an actress she is. She plays the deluded, slutty cheerleader perfectly and actually has some great comedic timing in this. I canâ€™t really pin point one overall weak performance in this movie, although two of the more underdeveloped cult members donâ€™t much time to shine, they really work with what they can. In smaller roles we have Leslie Bibb and Ken Marino as Coleâ€™s parents, and Chris Wylde as Melanieâ€™s dad who offer some comedic moments of their own.

The Babysitter is hands-down one of the most fun horror-comedy films Iâ€™ve seen in a while. Itâ€™s not without its problems, but itâ€™s one fun as hell ride you should check out on Netflix right away.