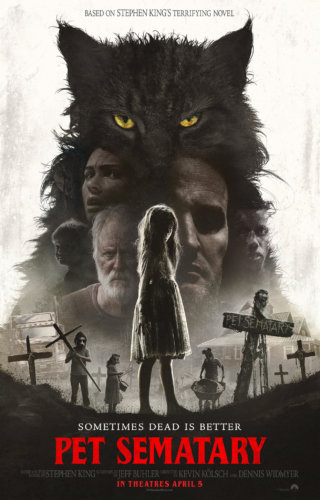 The newest adaptation is Stephen Kingâ€™s classic novel is a much more solid version than the 1989 version. While the first half does follow the same beats as the novel itself and the original film, it is the mid-point and the last half where it goes in a different direction. While the novel is still superior, I found that they changes and direction they took with this version was fantastic and gave new life to the story. It is because of these changes we are given much more intensity and more character development for the character of Rachel. When the mid-point twist occurs, it is so well-excecuted in how it psyches the viewer out of what is going to happen. Itâ€™s unfortunate that the tragedy is shown in the trailer but itâ€™s still pretty effective. The change of the tragedy from the novel works just as good as the source materialâ€™s tragedy. Itâ€™s still sad, but thereâ€™s also more room given for the performance of the actor to offer more choking moments.

From there, the rest of the movie is balls to the wall crazy, and ends with a pretty terrifying final scene that the viewer is left having to imagine the horror that comes next. The intensity of the last half of the film makes up for the pretty dull first half. Despite the slower first half, it still seems like the family is a bit under-developed. The same is said for their neighbor Jud. It seems like heâ€™s only present to present the graveyard, whereas he has a lot more presence in the novel. And itâ€™s a shame because John Lithgow does a great job in the role with what we have of him. Along with Lithgow we are also treated to easily the best performance of the film by Amy Seimetz as Rachel. Seimetz brings in the emotional pull of the film and you really buy into the sadness and terror sheâ€™s expressing. Jete Laurence does very well too in the role of Ellie, whom also has quite a bit of material to work with. Sadly, itâ€™s Jason Clarke who is the weakest link. Heâ€™s the lead but we donâ€™t feel much attachment to him, and his overall performance often times feels wooden or trying too hard to show emotion or look crazy, but I guess heâ€™s at least trying. The other con I could mention is that the cemetery scenes come off as a bit too hokey in how they play out the creepiness of it.

Overall, I didnâ€™t love the film, but it is a much stronger adaptation of Kingâ€™s novel, primarily because of the changes it made from the source material while still being faithful to the story its trying to tell.