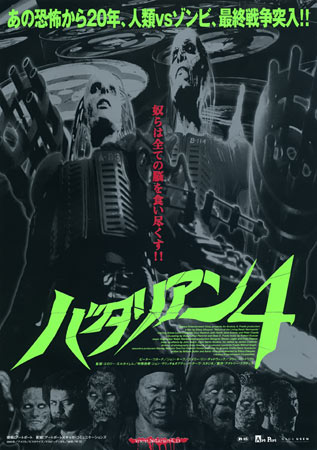 Our one and only Twitter reviewer Tim Schilling is back with another zombie tweet by tweet review. Tonight he will be looking at zombie sequel “Return of the Living Dead: Necropolis.” The film received harsh reviews from critics and fans alike upon release and Lion’s Gate sent the film direct to Syfy. Does the film deserve its reputation or is there something here that is worth watching? Let’s crack open this zombie and see if the brains are still fresh.

Thoughts before the film:
First review I’m doing in a long time… Don’t ask why I picked this one. #ROTLDNecropolis

Thoughts while watching:
0:02 Chernobyl is such a cool place.
0:08 The zombie rules aren’t consistent in this series. Only part I and II seem to be the same.
0:09 Oh, rain spread the zombie virus, they never did that before.
0:13 Wow this kid is a drama queen.
0:19 So far it seems 90% of this movie is filler just to make it 90 minutes long.
0:28 That dirk bike scene was completely pointless. 15 minutes wasted.
0:32 This is just ridiculous.
0:34 This girl can’t ride a bicycle without crashing but she can ride a dirt bike? Comeon.
0:39 “Nice pooper”… what.
0:50 I don’t understand where all of these random characters are coming from.
0:54 Send more security guards… Nope you ruined it.
1:08 Every single horror movie cliche just happened in one minute. I didn’t know that was possible.
1:09 I don’t want any of these characters to survive the whole movie.
1:17 New drinking game: take a shot every time someone goes to shoot their gun and there’s no more ammo left
1:21 Yes it’s over!

Final Verdict:
I don’t even know what to say about Return of the Living Dead: Necropolis. Like, I’m not one to hate someone’s work and call it shit cause I know the hard work that goes in it but that was just bad