The following is a list of guidelines that one should look at when trying to make a successful horror movie. I thought this was a pretty solid list with a lot of good ideas for independent horror filmmakers. The following list is a combination of Mary Hallberg’s list from the Hattiesburg Horror Movie Examiner and Screen Crave.com for the second half of the list. A big thank you to both websites for sharing! While the list does seem basic, I do think that this is going to help out some filmmakers working on their first scripts. Are there any others that you feel is missing from the list? 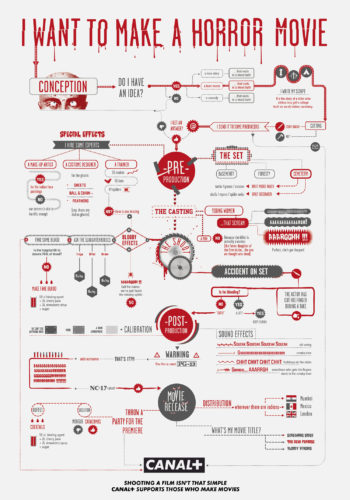 *Have interesting characters. Movies (and stories in general) are about people, not events. Sure, picking stupid teenagers off one by one works, but only for awhile. If you want to do something revolutionary in modern filmmaking, convince your audience to actually (gasp) care about the characters.

The interesting characters rule does not apply to villains. When introducing us to the villain, less is more. Did he suffer a terrible childhood filled with abuse and poverty? Leave it out. The less your audience knows about the villain, the less likely they are to sympathize with them. Sympathy isnâ€™t very scary.

*Create suspense. Even if you plan to show the monster in the end, make the audience wait for it. Sometimes not seeing something is even creepier than actually seeing it.

*Donâ€™t stress about budget. Some of the most well-known horror films have been low budget sleeper hits. Unless youâ€™re remaking Lord of the Rings, you can make do with a smaller budget. See: Insidious, Saw, Paranormal Activity, The Blair Witch Project, John Carpenterâ€™s Halloween

*Donâ€™t take your movie too seriously. Some of the best horror movies are the ones that try to be scary but end up being campy. Youâ€™re in the business of entertainment and if youâ€™re not entertained yourself, your audience probably wonâ€™t be either. Have fun with it! Plenty of people would kill to be in your position. Well, not literally.

*Fear. A good horror film takes common fears, exploits them, and acts upon them. So what do people fear? Easy. They fear the darkâ€”create visual imagery thatâ€™s ill-defined and shadowy. They fear the unknownâ€”keep certain psychological and physical components hidden. They fear deathâ€”keep the body count unpredictable as to who might be next. Knowing what people are afraid of isnâ€™t rocket science, and fears arenâ€™t always rational. Would we have a horror movie (Stephen Kingâ€™s It) with an alien killer dressed as a clown if a lot of people werenâ€™t at least a little afraid of clowns?

*Blood and gore! Above all, people must die in a horror movie. Remember what we said about exploiting the universal fear of death? And as far as dying goes, a horror movie doesnâ€™t necessarily have to be gory, or gratuitously violent, but a little blood must be split in order to remind the audience that the shit is real, and the stakes are as high as they can be. A character vanishing out of thin air is out of sight, out of mind. We might know heâ€™s dead, but as long as we donâ€™t see him hanging from a tree with his guts spilling out, some part of our brain is still subconsciously suggesting to us that thereâ€™s a chance heâ€™s just chilling on a beach in Maui or something.

1 thought on “I Want to Make a Horror Movie!”