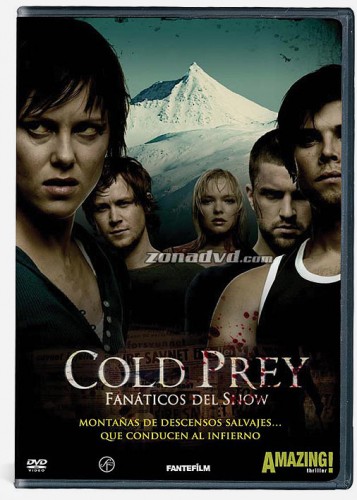 Films like “Inside” and “Martyrs” dare to do something new with the genre by adding issues of abortion and religion into their plots. But, there are just as many crappy horror films that are foreign as there are bad American horror films. So what does this long diatribe really have to do with our movie of the night? Well, it’s foreign and it’s horror and this is just something I’ve wanted to get out of my system. Do we all feel better now?

Well my movie of the night is the “Cold Prey”, a solid if unremarkable Norwegian horror film that teeters the line between clever and redundant. The plot is relatively simple. Jannicke, Morten Tobias, Eirik, Mikael and Ingunn are on a snowboarding vacation in Jotunheimen. They are forced to take shelter in an abandoned hotel when Morten Tobias breaks his leg and their car is too far away for them to reach within nightfall. They quickly discover that the hotel was closed in the seventies due to the disappearance of the managers’ son. They find that they are trapped in the hotel with a psychopath killer, and they have to protect themselves and hopefully survive.

Is the psychopath the missing manager’s son? Will he pick them off one by one with the trusty slasher staple of a weapon, the pickaxe? Can you count on one hand the number of fake “jump” scenes that really don’t make anyone except the characters jump? Big yawn. There just isn’t enough surprises or clever twists and turns here for those who like suspense. And there’s hardly enough gore for those who like their horror films extra raw and bloody. Everything here is in place for a really great horror movie. The acting is a cut above most horror movies, the cinematography is quite striking and the direction is lean and first rate. Sadly all of the good will put together to make this project a success is let down by a weak script. This isn’t a bad film but it sure as hell isn’t anything special. I was expecting a steak and got a 99 cent hamburger. Go in expecting that hamburger and there is a good chance that you may enjoy it more than I did. I hope so.

As a final note, this review was done in part for the wonderful Final Girl herself, Stacie Ponder. You can check out her blog and her “Final Girl Film Club” here.