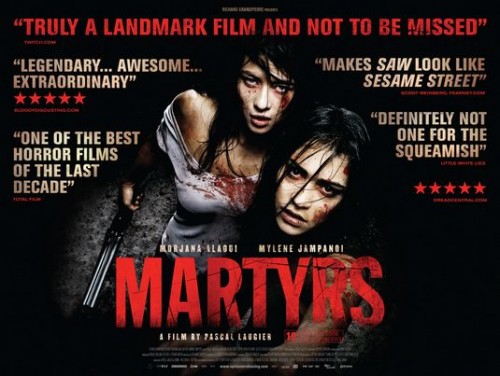 â€œMartyrsâ€ begins with a young girl, Lucie (Jessie Pham), as she escapes from a disused abattoir where she has been imprisoned and physically abused for a lengthy period of time. No signs of sexual abuse are identified, and the perpetrators and their motivations remain a mystery. Lucie is placed in an orphanage, where she is befriended by a young girl named Anna (Erika Scott). Anna soon discovers that Lucie believes that she is constantly being terrorized by a ghoulish creature; a horrible, disfigured, emaciated woman (Isabelle Chasse) covered in scars.

Fifteen years later, Lucie (MylÃ¨ne JampanoÃ¯) bursts into a seemingly normal family’s home and kills them all with a shotgun. Lucie calls Anna (Morjana Alaoui) to tell her that she has finally found and killed the people responsible for her childhood abuse and requests her help in burying the bodies. Upon arriving, Anna is horrified at the carnage, and worries that Lucie may have murdered the wrong people. Anna later discovers the mother is still alive and tries to help her escape, but the two are discovered by Lucie, who bludgeons the mother to death. Lucie is again attacked by the scarred creature, but all Anna sees is Lucie banging her head against the wall and cutting herself with a knife; the ‘creature’ is nothing more than a psychological manifestation of Lucie’s guilt for leaving behind another girl who was also imprisoned and tortured with her as a child. Lucie tells the apparition that she killed its tormenters and that it can rest, but it has no effect. Lucie finally realizes that her insanity will never leave her and slits her throat. She dies in Anna’s arms.

The next day, after mourning her friend’s death, Anna attempts to clean up the house and discovers a secret underground chamber. Imprisoned within is a horribly tortured woman, covered in scars with a strange metal contraption nailed to her head. While Anna attempts to care for her and clean her wounds, a group of strangers arrive and shoot the woman dead. Captured by the menacing newcomers, Anna meets their leader, an elderly lady only referred to as Mademoiselle (Catherine BÃ©gin). She explains that she belongs to a secret society seeking to discover the secrets of the afterlife through the creation of “martyrs”. Systematic acts of torture are inflicted upon young women in the belief that their suffering will result in a transcendental insight into the world beyond this one. So far, all of their attempts have failed, and they have only created “victims.”

“Martyrs” is the kind of movie that makes you want to take a shower immediately after viewing it. It is bleak, hopeless, and has a constant theme of despair. It is also brilliant in the way that it is able to depict the suffering that one human being can force onto another. It is gore but it is poetic gore with a clear message for it’s audience. I don’t know that I can or will ever watch this masterpiece again and it is too bad that the ending gets a bit too abstract for its own good but it is still a worthwhile watch. Just don’t say I didn’t warn you.