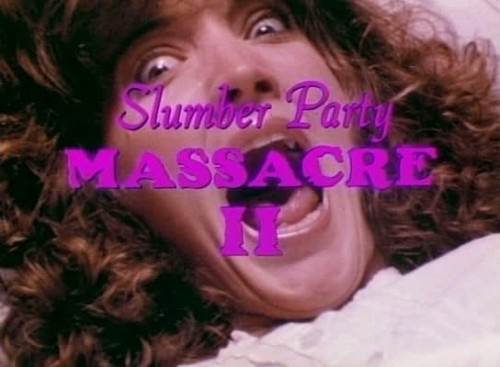 Back in the year 2000 or 2001, not sure which, I rented both SLUMBER PARTY MASSACRE and it’s sequel for the first time. I was extremely excited, but especially for part 2, because the coverart featured a character from GREASE with an awesome guitar with a drill attached. I was not disappointed.

SLUMBER PARTY MASSACRE II pretty much has everything I love about film going for it. Or more specifically, it has everything I love about ultra-cheesy late 80’s B-movies. The film starts off with Courtney (Crystal Bernard) who survived the original massacre along with her now institutionalized sister and Trish, who probably never threw a slumber party again after that night. She has nightmares about what happened five years ago and about a 50’s greaser with a guitar-drill targeting her and her sister. Thankfully, she has a form of escapism with her all-girl rock band who all gather at a condo for an all-weekend slumber party (I think I just overused the word “all”)! Unfortunately, her nightmares only get worse and worse until the 50’s greaser driller-killer crosses over into reality.

SPMII is just pure fun, I watch it whenever I need to completely forget about the real world for an hour and twenty minutes. The cast is actually very talented with the beautiful Crystal Bernard competently carrying the film as the sweet, innocent and tortured Courtney. Juliette Cummins, Kimberly McArthur and Heidi Kozak are also joys to watch as her friends. Juliette is kind of an obscured scream queen, having also starred in FRIDAY THE 13TH PART V and PSYCHO III, always playing a fun party-girl type. Heidi is lovably ditzy and her short perfomance of “Pie in the Sky” always gets a good laugh out of me, as does her famous zit scene. Joel Hoffman, Scott Westmoreland and Patrick Lowe also do good as the guys. However, the real show-stealer is Atanis Ilitch as The Driller Killer, who is one of the greatest B-movie villains of all time and has so much fun in the role slicing and dicing Courtney’s friends and doing a little song and dance in between. I wish I could see him in more films, but if this was the only film I’d ever done, I guess I’d be satisfied. Special mention to Jennifer Rhodes, a favorite of mine who plays Courtney’s worried mother.

Besides the great cast, we have a great director behind the camera who puts a lot of energy into the film as well as a fun and cheesy soundtrack. Besides the Driller Killer’s tunes and Hell’s Cafe, I love those Wednesday Week songs, I think we can all agree that 80’s girl bands are awesome. All of these ingredients come together to make a film that no one can really say is great or top 250 on imdb material, but it’s just a fun way to forget your problems and just enjoy a crazy 80’s teen horror/musical film.