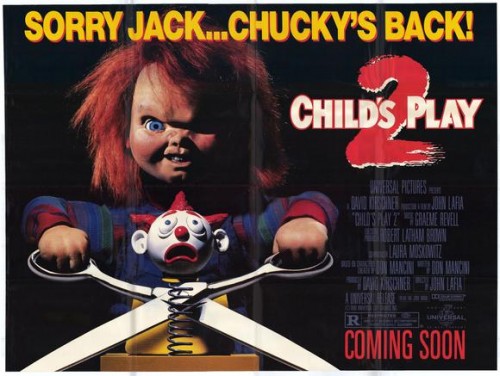 Thoughts before the film:
I love revisiting old movie series I haven’t seen in a while. Going through a Chucky phase right now. #ChildsPlay2

Thoughts while watching:
0:02 Why would they rebuild Chucky though?!
0:05 Child’s Play series brings me back to my childhood more than any horror movie, me & my friends watched them all the time.
0:08 “Stick it up your ass” Foreshadowing?
0:15 You gonna get it for throwing Chucky round like that!
0:19 I really wanna know how strong Chucky is cause you know, he’s a doll. And he strangles people.
0:22 I’d be afraid to go in this house cause I think I would *accidentally* break everything.
0:24 I wonder how much trouble the makers got in for having a kid that young smoke… If it was even real.
0:31 Andy has been with the foster family for like a day, and they’re such assholes to him.
0:39 Death by ruler.
0:54 Chucky basically kills anyone who was being a bitch to Andy.
0:58 Damn women drivers, ain’t that the truth.
1:03 At least Chicago isn’t as scary as the first movie was.
1:05 That is a crap load of dolls
1:11 This is gonna bug me, in what other movie did someone lose a body part and it was replaced by a knife?!
1:15 Andy sure is one sick fuck by the end of this movie.
1:18 Chucky looks like cat puke.
1:22 This movie must have been so much fun to make.

Overall:
#ChildsPlay2: plot was different enough to make it just as good as the first. Very original and there was no cheesiness you see in sequels.