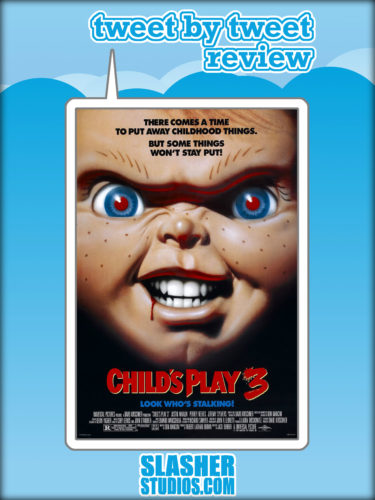 Our Twitter film critic Tim Schilling has been hard at work this week covering the “Child’s Play” series in all its bloody gory. Don’t fuck with the Chuck. Right? Well, today we have a review from Tim on the black sheep of the series, “Child’s Play 3.” Does Chucky still have some fight left in him or is this a series that should have died in the toy factory? Let’s open up the toybox and see what we have here.

Thoughts before the film:
#ChildsPlay3 was my favorite in the series, but after watching the second one last night again, I could change my mind. Hopefully it holds up though!

Thoughts while watching:
0:02 These opening are kinda gross… Blood and wax?
0:09 My dad actually knows a part of what happens in this movie. Kinda proud.
0:16 What ever happened to Kyle from the second movie? I liked her.
0:22 “I said you ASSHOLE, sir. ”
0:25 I wonder how Chucky wrapped himself in the box like that?
0:28 No way is this girl the same age as Andy, she looks like she’s at least 25.
0:33 When Chucky was falling into the garbage truck and just said shit, probably the funniest part of the whole series.
0:38 Chucky’s gonna be a bro.
0:43 Saying Fucking geek to someone, was that offensive back then?
0:53 What is this guy, the hair god or somethin?
0:56 Now the hair god is judging Chucky.
0:57 …but even the hair god is no match for Chucky.
1:00 Tyler is like two feet tall, how is he even at this school?
1:11 It’d be sick to really play the war game or whatever this is.

Overall:
After watching the three original movies over again, #ChildsPlay3 is still my favorite. #ChildsPlay3 original story that again was diff enough from the others to make it stand out. Also kept continuity which doesnt happen much