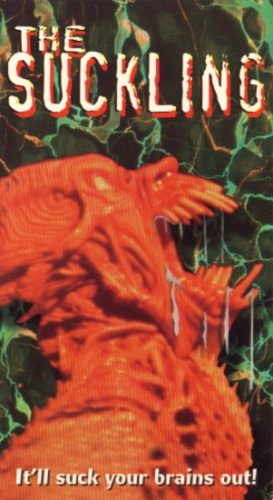 A guy convinces his very reluctant girlfriend to get an abortion and ends up dragging her to a whorehouse that doubles as an illegal abortion clinic. When the girl refuses to get the abortion, she is drugged and given the abortion regardless. The aborted fetus is then flushed down the toilet and lands in the sewer, but a barrel of toxic waste has been overturned and it leaks into the sewer onto the fetus. The fetus then springs to life, traps all of the occupants of the whorehouse/abortion clinic inside the giant home and proceeds to kill them off one by one….

Oh yeah, this movie is every bit as tasteless and trashy as it sounds. In one scene, the madame (appropriately named Big Mama) finishes an abortion, then hangs her lab coat on the same wire hanger!! The effects are atrocious… Actually everything about this film is atrocious but extremely hilarious! I had a lot of fun watching this movie because just when you think the filmmakers can’t sink any lower, they do!! There is a huge bodycount. Lots of people getting killed off and there’s a psycho ex con trapped in the house who holds them all hostage! So not only do they have to deal with the mutant fetus, but also the ex con as well! Despite the fact that the characters are meant to be despicable, I still liked every one of them. I particularly loved the hooker named Candy who has had 5 abortions so far and explains to the heroine that getting an abortion is “really no big deal.” I also love how calm she is about a mutant fetus slaughtering her friends/clients….

It’s absolutely bottom of the barrel but what can I say?? I enjoyed every minute of it!!