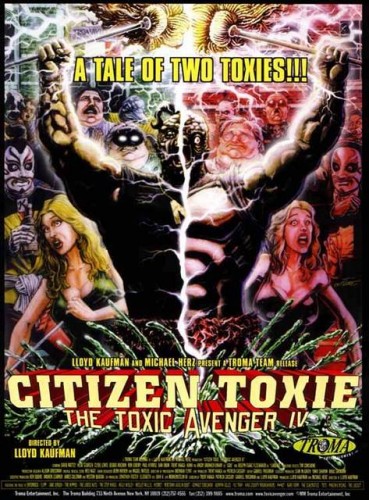 I love the Toxic Avenger franchise, each one of them deserves this spot as well as a few other Troma Films(Terror Firmer, SGT Kabukiman NYPD and more), but I thought I’d mention this one cause it really is the best of the sequels as well as my personal favorite.

The film starts off letting you know that the studio heard how everyone freaked on the 2nd and 3rd films and uses Stan “The Man” Lee give a monologue of apology simply stating “Sorry about that, this is REAL sequel” that is the best opening. Now if you are aware of these films you know nothing makes sense and everything is so overly exaggerated that you can’t take it seriously. However, this film seemed different to me, I mean we still have the absurdness, the exaggeration and more, but its feels like they took even more care in making the film, anyone who has gotten this on DVD, you might have noticed an entire disc devoted to the making of this film, so we see all the hell they go through and unlike Hollywood films we don’t get a bunch of happy faces and constant praise, its all business and truth and you gotta respect the Troma team for that.

This film plays very much like a comic, with Toxie being blown into an alternate universe where he is known as the Noxic Offender and his evil counterpart in his world. Its even funnier when see all the characters alternates, including his wife’s alter self being that of the girl from the 2nd and 3rd films and seeing as this is meant to be a bad version, that is telling you how the makers felt about that film.

he effects in the film are pretty great for such a low budget, no matter how much money a film makes Troma has always made sure to stick to a budget as not to be Hollywood and thinking money will solve everything(however the budget was slightly higher, but that is ok).

The acting is what you would think it is, crude, lude and at times laughable, to think Hollywood wants to remake it into a big budget film, I mean what would that look like, they are afraid to release R-Rated films nowadays, but to release a film, so X Rated would be impossible, so you know they’d screw it up.

I also like how this film also includes a sequel element to SGT Kabukiman NYPD, it does it in a way that makes you interested in seeing the film, but not making it necessary to have seen it to enjoy. I love the scene where he walks drunk over to Toxie’s girl with a paper slong hanging out, lol.
We get some amazing cameos as well, aside from the Stan Lee voice cameo, we also get some playboy bunnies(at the playboy mansion, along with Hugh Hefner), Ron Jeremy and even Motorhead’s Lemmy Kilmeister, who really steals the show, Corey Feldman. There is another cameo that I won’t ruin for anyone, cause its unexpected, but very welcome and funny.

If you love bad films that are great to watch, I’d say do it, but make sure you do it with a crowd, cause its just not the same without others. The film even leaves a nice open ending for a sequel in which is now in the making.