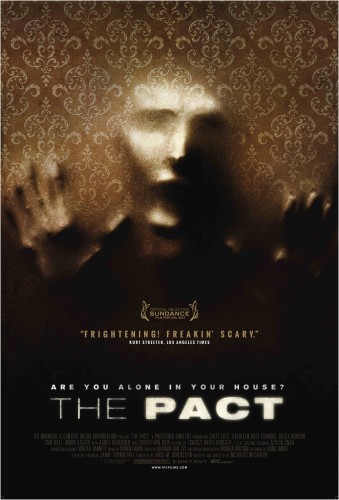 As a Slasher Studios exclusive, we have two brand new clips from the upcoming horror flick from IFC titled “The Pact.” Looks like a hair raising good time for those that love their chillers ice cold.

Synopsis:
After their mother passes away, sisters Nicole and Annie reluctantly return to their childhood home to pay their last respects. While staying overnight in the house, the sisters sense a mysterious presence in their midst: noises startling them in the night, objects moving about, a fallen picture of an unknown woman posed next to their mother. Annie begins experiencing a series of intense and disturbing dreams â€“ visions that lead her to uncover something terrible about her motherâ€™s past that is finally revealing itself.

To view THE PACT trailer and get more information: http://www.ifcfilms.com/films/the-pact