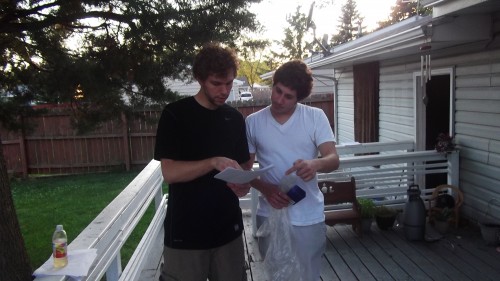 One thing I have learned over the years, is that a film will change in many aspects as it moves from pre-production, to production and then to post. This trend has continued within Blood Brothers, the latest film from the insane minds here at Slasher Studios. As Kevin Sommerfield first put his fingers to the keyboard many months ago, we had a script that we were both proud of. But, after many nights of rewrites, along with the additions and subtractions of characters, we ended up with Blood Brothers.

The majority of pre-production was not exactly perfect. After a few snags here and few snags there, the nerves really started to kick in as the big shooting weekend approached. But, as always, we were able to smooth out all of the problems and were set to begin filming.

Blood Brothers was actually a very smooth shoot. It was hot and cramped, but still a bloody good time. Speaking of blood, we had a lot! With all practical blood effects throughout the film, I was extremely proud of the way they all turned out. We all made sacrifices in order to finish this shoot on time and I can not wait to get into the editing room and really see how this film will piece together. I must thank each and every member of the Blood Brothers team. Without even one of you, this film would not be what it is destined to become: GREAT!