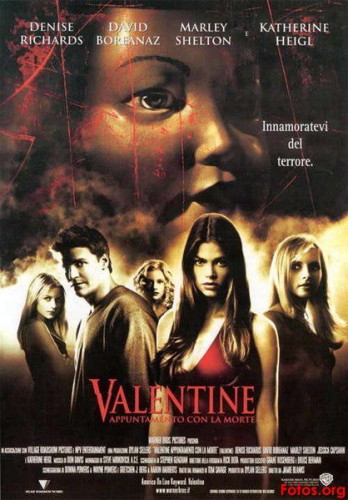 In 2001, Jamie Blanks’s Valentine was released, and slowly just drifted away because I rarely hear people talk about it. But I have loved it ever since it still came out, and still love it today. It’s not my favorite holiday horror film,but it is one of my favorites. Plus, it’s a perfect triple feature to watch with My Bloody Valentine (1981), and My Bloody Valentine 3D (2009).

Valentine is opens with a great credit opening at a 8th grade Valentine’s Day dance where a young quiet teenage boy, Jeremy Melton, wants to just dance with somebody. But all the girl’s reject or turn him down till he meets Dorothy, who is a quiet teenage girl who doesn’t have anybody to dance with either. When a few teenage boy spot Jeremy and Dorothy making out, Dorothy accuses Jeremy of attacking her and the boys decide to humiliate Jeremy in front of everybody. Years go by where all those girls including Dorothy start getting strange Valentine’s cards and gifts with the signature “J.M.”. After that, the girl’s start getting stalked and killed one by one by someone wearing a cupid’s mask reaching up to Valentine’s Day. Could this be someone just playing with these girls or could it be Jeremy back for revenge?

For me, this film has so many great elements to it making it one of the last and best kinda late 90’s going into the early 2000’s slasher films. It has fun characters, fun kills, great use of the color “red” hinting that it is Valentine’s Day, well done story, some great acting, an awesome and creepy killer, and Jamie Blanks’s who knows how to make fun and well done slasher film because he also directed one of my favorite 90’s slasher films, Urban Legend. Jamie Blanks’s knows how to make a great slasher film because he uses all those elements that I mentioned before. In my opinion, Jamie Blanks’s doesn’t get the credit he deserves with his films, and Valentine itself just seemed to drift away and I think it is because the 90’s slasher eerie was going away in which Valentine just came to late in it’s prime. If you haven’t seen Valentine then I recommend giving it a watch especially on Valentine’s Day!