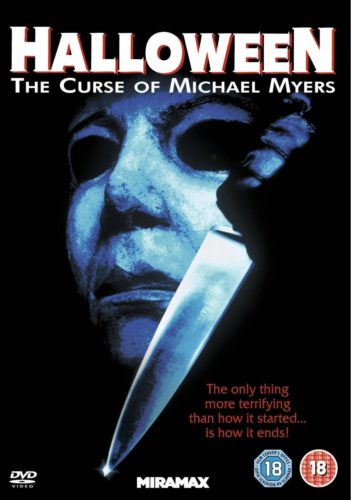 Our resident Twitter reviewer Tim Schilling is starting the weekend with a return to Haddonfield and a look at one of the black sheeps of the Halloween series, “The Curse of Michael Myers.” Released in 1995 to some of the worst reviews in years, the film was a disappointment for both fans as well as Dimension which had recently picked up the rights to the series. Starring a young Paul Rudd, how does the film hold up 17 years later? Get out your knives kiddies and get ready to dig in.

Thoughts before the film:
I’ve seen all the movies in this series at some point, but I’ve never sat down and actually watched any of the later sequels. Over time these movies just blended together cause I saw them when I was younger, half hiding my face under the blanket! #Halloween6

0:05 They like remixed the theme song for this one. I’m not feelin it.
0:09 I probably should have watched Halloween 4 & 5 before this so it would have made more sense.
0:10 Lol @ Paul Rudd! He’s so young in this.
0:23 I can’t wait until this fat guy dies. Michael better kill him.
0:28 He finds a kid in the bathroom… A true prom night dumpster baby?
0:31 Only in America you get security called on you when you ask for a doctor to see your baby.
0:38 OH MAN. The scene when Michael is in his house again, this scare the shit outta me as a kid. I remember this perfectly.
0:45 |> I made the thorn.
0:49 I don’t know if it’s my DVD or the actual movie, but the audio sounds TERRIBLE at some parts.
1:04 You watched her die from across the street! Why even bother checking if she’s still alive?
1:07 You aren’t Michael Myers, you can’t just jump outta the window and survive like that.
1:08 Those people in the black with the masks and stuff, I’m not even gonna question why they came up.
1:17 Holy flashing lights. You’re gonna give me a seizure.
1:23 Michael bleeds green… Alright.
1:23 Rip Donald Pleasence! I didn’t know they dedicated the movie to him.

Final Verdict:
I liked Halloween: The Curse of Michael Myers mainly for the nostalgia feeling it gave me of being so scared so much of a movie as a kid……but for the movie itself, kind of all over the place. I didn’t care for the characters or story much at all. But! Still entertaining.