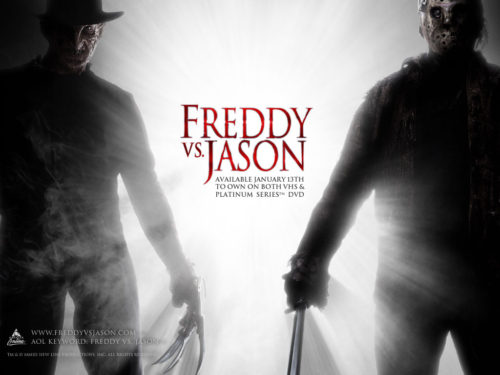 After the dismal box office but creative success of “Wes Craven’s New Nightmare,” it took New Line Cinema nearly a decade to create the ultimate Nightmare. One in which Freddy would finally meet his match in the form of Jason: “Freddy Vs. Jason” in fact. The film was a huge hit at the box office grossing $83 million and becoming the number one movie in America for two weeks in a row. How does it stand a decade later and which side are you on? Tim Schilling answers both in a brand new tweet by tweet review.

Thoughts before the film:
I’ve seen this one tons of times, but after watching the entire ANOES series, I think I can watch this in a different way.

Thoughts while watching:
0:06 Jason comes back to life for no reason at all every single time, I won’t even bother.
0:14 This may have been one of the first slasher movies I’ve seen, I always remember the guy getting squished by the bed.
0:18 Laurie’s boobs are distracting.
0:26 In Freddy’s Dead there wasn’t a single kid in the entire town, now there’s enough to fill an entire high school?
0:29 What if someone was in a coma and they lived on Elm Street… You’re fucked.
0:34 Raaaaaaaaaaveeeeee. I love this scene.
0:37 Get actors that actually look like they’re high school age.
0:40 Glow stick man is a creep.
0:43 I just don’t understand how someone can’t runaway from Jason.
0:47 The backstory to this movie is so weak.
0:52 Freddy’s back bitchez.
0:56 The part where Laurie thinks she’s awake talking to everyone at the table is so funny.
1:06 The fight scenes between Freddy and Jason are too awesome to hate.
1:13 Oh yeah make out with Jason.
1:17 I love the way Freddy is brought into the real world to fight.
1:20 #TeamFreddy.

Final Verdict:
#FreddyVsJason is way too much fun to hate. The whole movie is just a cool idea that, while I didn’t think was perfect, but was still good. I thought it was more a Freddy movie than a Jason one. A sequel should have been made with that killer ending.