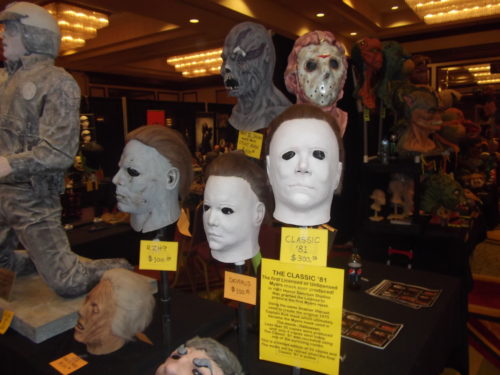 As the fire alarm rings inside the lobby of the Marriott just after midnight, Kevin and I take off to the hotel bar and quickly order a couple drinks in fear the fire was going to force us out. About 5 minutes and $14 later, the alarm silences and the massive party continues. False alarm. With hundreds of insanely drunk horror fans taking over the hotel, it was a miracle that this was the only prank alarm pull. The parties at Horrorhound Weekend were to die for. Lots of people, lots of alcohol and lots of fans talking slash.

Slasher Studios quickly found a warm home with a few fellow Wisconsin filmmakers as well as a few horror fans from around the country. Having walked a few blocks from our hotel to the convention party, and in no shape to walk back, we were given a ride by two new friends of Slasher Studios: Kyle and Alyssa from Buffalo, NY. Horror and Sci-Fi fans to the max, they made the long car ride to spend the weekend meeting some of their favorite movie stars. They were great to talk to get to know and hope to see them at future conventions as well. So, not long before sunrise, we pilled in their rental and headed back to the warm and sticky Radisson down the road. We found some food in the bottom of the cooler, popped in a movie and called it a night.

As we awoke the next morning…err afternoon, the sun was shining and it was a beautiful day for more movies and anything and everything horror related. Before heading to the convention, we stopped for lunch at Jack In The Box. It’s been a while since I had seen one, so I made the stop and ordered and hand full of tacos. Back at Horrorhound, we checked out some more booths and met a few new people as well. But all day our minds were on one thing: the awards ceremony. Later on at 7:30, the awards presentations began with the great Elvira and Peaches Christ as the two hosts of the event. With Teddy as just one of 13 short films selected, we were crossing our fingers, but new that there were many great films. The winner was to receive a paid trip to LA and have a red carpet screening of their film. Very, very cool.

Although Teddy didn’t come away with the big win that we had hoped for (Best Short went to the very deserving sci-fi flick “Other”), the incredible support of complete strangers made the trip worth every penny. People stopped us in the hallways and wrote to us online saying that they saw the film and were now big fans of Teddy and Slasher Studios. I’ll mark that up as a win anyday.

Later on that night, after watching Chopping Mall in the hotel (on my computer because the TV in the room was so old it didn’t have and hookups for the DVD cord), we headed back down the the Marriott and was astounded my the massive amounts of people EVERYWHERE! The place was packed, the drinks were flowing and everyone was having a great time.