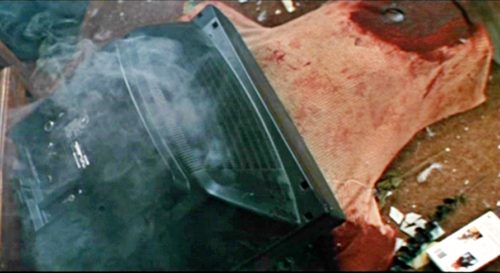 Stu finally gets what is coming to him at the end of this epic battle with the great Sydney. As they struggle through the house and feathers fly, Stu is kicked in the crotch, bitten on the hand and slammed in the head with a vase. All futile attempts and escape from Sydney until she unleashes her inner Freddy and fries the bloodied Stu with the TV. There are many incredible deaths found within the Scream series, but this one is a bit unique as the cause of death is electrocution from a television set. Gotta love the old tube televisions….