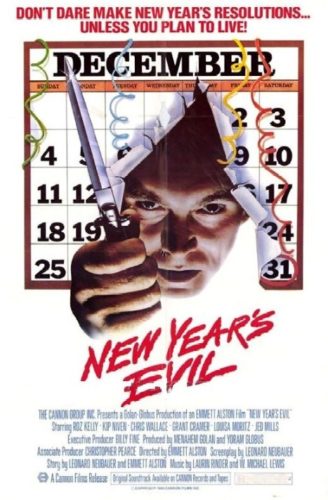 Released in 1980, New Yearâ€™s Evil is yet another holiday themed slasher movie and back in the 80s it seemed to holiday, or event was safe from Halloween to Christmas, Valentineâ€™s Day, Prom, Graduation and hell even slumber parties werenâ€™t safe. New Yearâ€™s Evil is still early into the slasher cycle when the clichÃ©s were still in the early stages and while this is a slasher flick itâ€™s also a little different from the norm in the 80s.

During a New Yearâ€™s Eve party broadcast on TV the host Diane (Roz Kelly) receives a call from an unknown killer (Kip Niven) stating he will kill somebody in each time zone; his voice is disguised (however we see his face so no spoiler there and the calls are hysterical I am EVILLL). He records each killing on cassette tape (blast from the past) and then after each murder he calls the show and plays the tape back.

The screenplay by Leonard Neubauer is the typical of its time with faceless victims with zero depth; we know who the killer is from the start at least in terms of looks and I think anyone with even half a brain should figure out his connection to Diane so the mystery angle assuming that was the plan is a failure and I have to think that was the point by Neubauer I canâ€™t see him writing this as any kind of mystery. New Yearâ€™s Evil takes a different approach with the script in regards to the killer isnâ€™t wearing a mask or disfigured and in many ways, Neubauer seems to also try and mix in more thriller aspects; while the screenplay has some entertaining moments and some decent comedy and a decent touch of family drama, which does add a little bit of depth to an otherwise sloppy screenplay, but in the end itâ€™s brought down by the fact we know who the killer is and again its painfully obvious his connection to Diane so therefore the cops trying to figure things out doesnâ€™t work as well it could have if the killer was kept hidden.

Director Emmett Alston delivers the standard slasher flick just without the gore and nudity these movies became known for; the direction is rather flat with very little in the way of suspense and tension and the production has much more of a TV movie feel rather than theatrical. The death scenes are decently staged, but they lack any real flair or any blood. New Yearâ€™s Evil is a little sloppy and at times not very well made, but itâ€™s not a complete hack job either. New Yearâ€™s Evil has built up a nice cult following so I suppose Alston did something correct and despite the many flaws of the movie even I have to say I enjoyed the movie even if nothing really stands out.

The one thing interesting about New Yearâ€™s Evil are the primary characters are adults in their late 30s to early 40s; most slasher movies feature teen characters or characters in their early 20s so this for me stands out due to that, but older characters doesnâ€™t mean theyâ€™re any smarter as Diane is a rather useless final girl and while the performance by Roz Kelly (best known from Happy Days) was fairly good, but again she was rather useless as the final girl and towards the end with the showdown with the killer she seems more than content with being a victim rather than fighting back.

Overall New Yearâ€™s Evil while in no ways one of the better slasher flicks of the 80s does work in that 80s slasher sort of way and fans of these films will totally understand. Everything here is rather pedestrian and the villain and his disguising of his voice is hysterical and you gotta love the way the guy is the master of disguises going from a worker at an insane asylum and even a priest.