Welcome to a brand new segment on Slasher Studios: Kevin & Steve’s Slasher Reviews. Every Tuesday, Kevin and Steve will be taking on a classic slasher and reviewing it here at Slasher Studios together. This is no ordinary review. These two will be discussing the film as they watch it and reporting the findings to you. This week the duo take on the 1981 slasher classic “Happy Birthday to Me.” 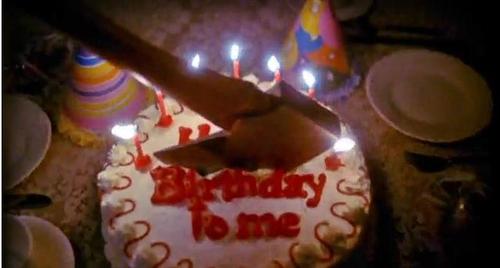 Kevin: â€œHappy Birthday to Meâ€ is preposterous, over-the-top, and silly. A blend of all of the 80â€²s excesses rolled into one far too long film (outside of the Scream franchise NO horror movie should run upwards of two hours). This is a fun film that really could have benefited from a shorter running time. As much fun as I had with this film the way it is, I feel this movie would have had an even stronger story and maybe even more of following if a few cuts were made here and there. Nonetheless, â€œBirthdayâ€ works. Maybe it is the silly deaths (gotta love the shish-ka-bob to the mouth or the weights to the crotch) or maybe its the outlandish ending that doesnâ€™t even try to make any sense whatsoever. Seriously, a Mission Impossible style mask? Any plan that involves drugging someone several times in a week with a latex mask made to resemble said person is probably a plan that is too convoluted by half.

Steve: The whole mask issue at the end didn’t really bother me as much as maybe I wanted it to. Is it out of place? Yes. Does this bring up a number of unneeded question? It sure does. But, like many great films, we need to suspend r disbelief and just enjoy the ride.

Kevin: Nevertheless, whatever it is, this movie put a blood red smile across my face for the majority of its running time. Great atmosphere (love the gothic style setting of the university), steady cinematography, and a capable cast also help matters considerably. Also, I gotta give the movie credit for actually giving us characters we like and care about. These are people we really don’t want to see die and we mourn the loss for several of them after they do die.

Steve: I gotta say how refreshing it is to watch a film and actually enjoy the characters. So, props go out to the writing, direction and casting for working together to create a well thought out and well liked cast. Whether we talk about the jock or the nerd, we have fun with them all and in a strange and maybe morbid way, I was happy to see them all again at the corpse party.

Kevin: I canâ€™t say this is a great movie by any stretch of the imagination but if you are looking for a fine, fun 80â€²s slasher, this is definitely one of the better ones. Further note, the recent blu-ray of Happy Birthday to Me (on a combo pack with the original When a Stranger Calls) features an HD print that makes the film look better than it has ever looked before. Well worth tracking down! I have this film 3.5 bloody shisk-ka-bobs out of 4.

Steve: Happy birthday to me is a must see for any slasher fan. Track it down today and have a movie night headlined by this 80’s gem.

1 thought on “Kevin & Steve’s Slashers: An Invitation to “Happy Birthday to Me””