Kevin: From Maniac Films, we have a gory treat for you slasher fans in the form of Sloppy the Psychotic. Sloppy the Psychotic is the sort of deliberately offensive horror movie that most horror filmmakers are too afraid to make any more. The story centers around Sloppy, a part time clown who is living with his abusive parents. Things take a turn for the worse when, after a misunderstanding with a child, Sloppy is fired. Sloppy decided to get revenge killing all of those in his life that have teased or tormented him.

Steve: Sloppy brutally gets his revenge on his old boss, the woman who got him fired and even a random homeless man. The homeless man was actually the highlight of this film for me. He actually had great line delivery and from the look of him, he may have actually been homeless! And after drowning in a puddle of his own piss, this guy had a death just as disgusting as himself.

Kevin: Like a throwback to the best Grindhouse films of the 1970’s and the Troma films of the 1980’s, Sloppy the Psychotic isn’t meant to be taken seriously but mainly meant to have a good time with. I’d say the film succeeds in that accept. This isn’t the most polished indie film you’ll see (the cinematography and sound could both use some fine tuning) but the movie has its gory heart in the right place. 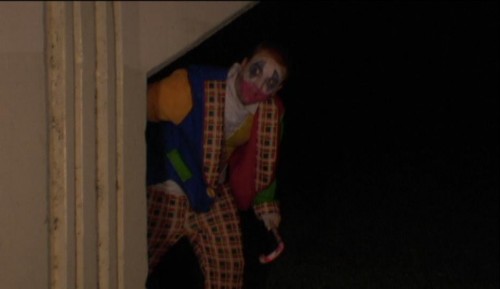 Steve: I think these filmmakers did in fact succeed at making the film they wanted to make. And of that, I must applaud them. 100 people could have read this script and I’m sure a big percentage would have had issues with at least a few aspects. It’s raunchy, disturbing and gross; everything they these guys wanted in there film. Good for them to make the film they wanted!

Kevin: If you want to see a movie in which a drunken frat boy gets a pole shoved up his ass or a dozen birthday kids overdose on “birthday cake” while vomiting up blood, you found the right movie for you. Also, I must mention the cut off penises…I’ll have nightmares for weeks. Thanks Sloppy!

Steve: The gore effects were not bad at all. Going into low budget films, one is never sure what to expect, but they at least did their homework on the blood effects. The cooking scene was Ã¼ber gross as blood and guts were covering the counters. And, like Kevin said, the penis scene…well, just watch.