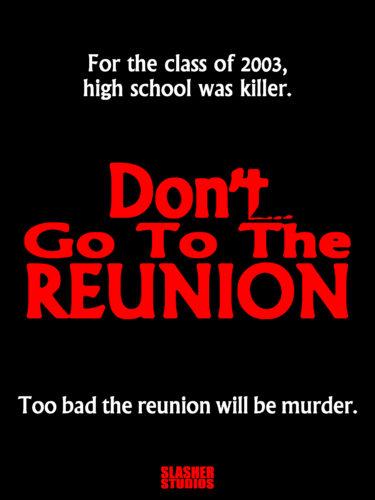 I woke up that morning after only three hours of sleep. I had been so excited and nervous to act in my first movie that I hadnâ€™t been able to nod off the night before. Someone had pulled out of the movie because of a scheduling conflict, and Kevin, the writer of â€œDonâ€™t Go to the Reunion,â€ had asked me to play the part only a week before the movie was supposed to start shooting. I had read for another role, so I had to learn all of the new lines fast. I went through them all week, and as I drove to Neenah that morning for two hours, my head still numb with tiredness, I recited the lines to myself dozens more times.

When I reached the high school, the first thing I noticed was just how many people were there to work on the movie. There were people working everywhere, unpacking and setting up a lot of impressive equipment. This was a serious production, and this only intensified the pressure I felt. The second thing I noticed were how young a lot of the extras were. We were all playing high school students. The extras were the age that they should have been, but Iâ€™m 26. I was worried that I might look like I was there to play the creepy old janitor. Luckily for me, 20-somethings playing teens is a bit of a horror movie tradition.

I didnâ€™t have dialogue for any of the scenes in the first part of the day, so I was able to ease my nerves by getting through several scenes without worrying about lines. The problem was, by the time we did get to my big scene, there was only a half hour left before we were supposed to get out of there. If I screwed up my lines, things could get bad. I basically put my mind on autopilot when the camera started rolling. I didnâ€™t think about anything besides just saying the lines, and hoped that the actual acting would somehow turn out okay. It would probably be awful, but it would at least be useable, right?

The director, Steve, called cut. â€œBrady, that was great!â€ he said, coming in to give me a high-five. Huh? I was confused. As the extras reset, one of them congratulated me as well. I had no idea what they liked, but I wasnâ€™t going to complain. I went through the rest of the shoot feeling like a million bucks, but I kept thinking about it. I kept trying to figure out how I did a good job of playing a shy movie nerd who gets awkward and nervous around beautiful women. And then I had it!

None of that required acting.