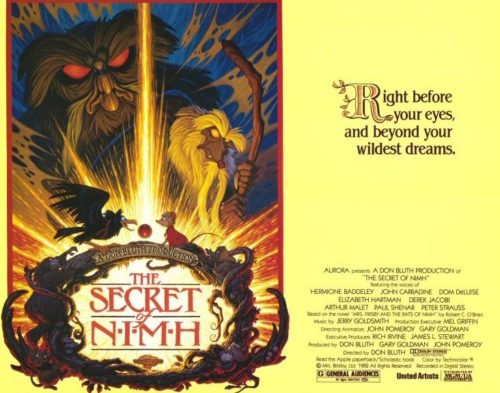 The Monster: The rats in The Secret of NIMH are of the usual size, but possess unusual intelligence. They escaped from a mental health institute and founded a society in a farmerâ€™s field.

When the farmer plans to plow over their home (and the home of a friendly family of mice), the nastier rats begin to show their true colors.

The Horror: Lead villain Jenner slavers and snarls his way off of the animated screen and into the nightmares of children and adults alike. His character art begins with a restrained ferocity and ends in complete animal rage.

In addition to this, Jenner is a rat. Rats and mice upset a large percentage of the population, and with good reason. They have signified death and disease for centuries.

The Shared Fate: Despite magical colors and a character voiced by Dom DeLuise, life in The Secret of NIMH is realistic and brutal. Characters betray and murder each other. A small (mouse) child may die if his mother doesnâ€™t get him medication and a better place to live. The rats are bigger and smarter than you, and theyâ€™re starting to get ideas.

This film might inspire a vague sense of dread in children, as it hints at an adult world where the rats are human and the stakes are just as high.

In other words: Good luck, get the medicine, dodge the claws, and protect your home while you can.