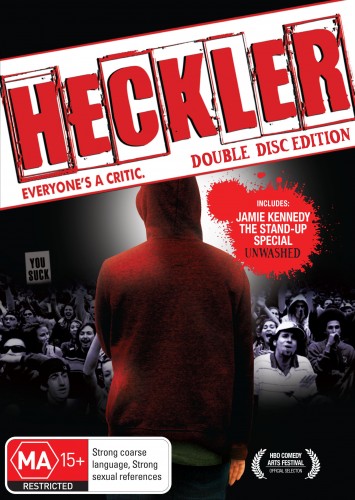 The Monsters: The audience.

These monsters hide in darkness and strike anonymously. Jamie Kennedy and director Michael Addis attempt to shine light on this dangerous mob, but by the time the film is finished, itâ€™s clear they are more scared of the audience than the audience will ever be scared of them.

The Horror: Audiences are everywhere, and theyâ€™re capable of seriously damaging human beings. Mostly, audiences harbor and encourage pesky comments and insults. Fuel those hecklers with alcohol and greater encouragement and they may even embarrass themselves on stage.

Off stage, critics can turn destroying art into a comedic assassination, ruining hard work for cheap laughs and small amounts of attention.

The Shared Fate: Heckler tries to turn the tables on hecklers by putting them in front of the camera and holding them accountable.

Unfortunately, the movie Heckler fails because the film itself is unprotected from the heckling and criticism it condemns. By trying to squash an annoyance, the film has instead proven how powerful an anonymous voice in the crowd can be.