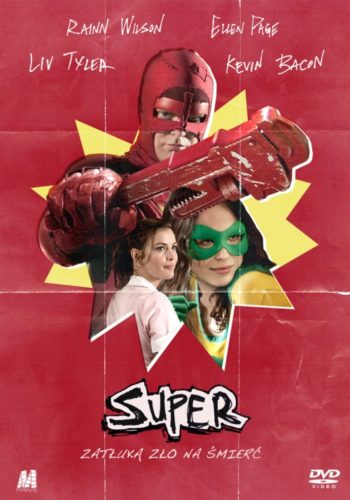 The Monster: The Crimson Bolt, aka Frank Darbo (Rainn Wilson) and his trusty sidekick Boltie, aka Libby (Ellen Page).

Frank is an average guy with a big heart, but when his wife Sarah (Liv Tyler) gets back into drugs with local criminal Jacques (Kevin Bacon), he canâ€™t stand the unfairness of life any longer. Encouraged by a vision from God, he grabs a costume and a wrench and heads out to smash away until the world is fair.

Along the way, he meets Libby. Libby seems average, too. But when she puts on a costume and has a reason to release her rage, she cannot be contained.

The Horror: Writer/director James Gunn is a veteran of low-budget Troma films, and he uses their grit and awkwardness to keep Super from becoming glossy. When wrenches smash foreheads, there is no ballet of athletic violence. There is only brute force and bloody results.

By the end of the film, Super infuses heroism with horror and tragedy in a way that Kick-Ass never really achieved. Put another way, it reminds viewers you canâ€™t make an omelet without breaking a few eggs. Then it coats in the screen in yolk and shells.

The Shared Fate: Superheroes, like vampires, get to fulfill fantasies without consequence. Or at least they have until recently, when films like Super are able to bring a horrible gravity to the actions of people in tights.

Watch this movie with your brain on, and youâ€™ll realize vigilantism leads to massacres and guilty consciences. Frank finds a way to hold himself together, but how many others could?