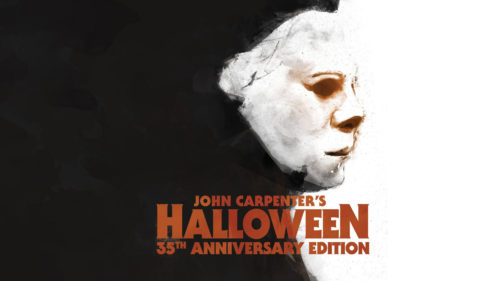 In a Slasher Studios first, reviewer Joshua Dean reviews the brand new Blu-Ray of Halloween in its 35th Anniversary Edition. Thanks Joshua Dean for the review!

It’s 2013… a year ending in “3,” so, like years ending in “8,” it’s time for yet another edition of John Carpenter’s classic suspense thriller, “Halloween.” Ever since Anchor Bay came along, Halloween has been released no less than 13 times (more if you count alternate covers, seasonal slipcovers, etc) between VHS, DVD, UMD, and Blu-ray. Three of these releases have been anniversary editions. First, the widescreen 20th Anniversary Edition VHS. Second, the 25th Anniversary Edition DVD (which featured a host of great extras, but badly compromised presentation of the film itself)… and third… the pointless (though admittedly attractive) 30th Anniversary Commemorative Set, which was nothing more than a compilation of the three (at the time) best releases of the film, paired with a few already-available bonus discs. Bear in mind, this is not including the countless VHS/Beta releases by Media, a VHS release by Blockbuster, and a Criterion Laserdisc, before Anchor Bay existed. Now, the time has come again for an anniversary release. The difference here, though, is that this time, they got it right. For the most part, that is.

For this 35th Anniversary release (exclusive to Blu-ray), Anchor Bay has hit a home run. They’ve packaged the disc in an absolutely gorgeous digibook package with newly commissioned artwork (and yes, actual artwork, not photo-manipulation studio crap) and included a few new extras focusing primarily on the one person who has generally eluded the bonuses over the years: the film’s star, Jamie Lee Curtis. But we’ll get to that later… right now, let’s focus on what matters: The guts of the Blu-ray, so to speak.

THE PICTURE: Anchor Bay’s original 2007 Blu-ray release of “Halloween” was generally considered a good release, but was never considered to be without faults. Some of those faults were attributed to the low-budget nature of the film itself, such as somewhat soft, waxy shots scattered throughout the film. Also, the master used was never meant to be seen in HD, as it was created for the 2003 DVD of the film (which had stripped the strong, spooky blue hues from the final act of the film). The 2007 disc did feature a tweaked version of said master, with several notable improvements… however, the colors were oversaturated for most of the film… and ironically, scenes that were meant to be heavily saturated… looked nearly colorless. Anchor Bay has set out to rectify this issue with this new edition of the film. Bringing in original cinematographer Dean Cundey to personally supervise and approve the new transfer (from the original film materials), and getting Carpenter’s approval for the new master, they’ve created a presentation of the film truly worthy of its deluxe packaging and label. To put it bluntly, this release makes the 2007 edition look flat-out BAD. The film no longer looks waxy and oversaturated, but wonderfully filmic and beautiful. The image is crisp and clear, featuring a natural-but-unintrusive film grain, and the daylight scenes feature a more subdued, gloomy and overcast look that, while not quite *looking* like Fall in the midwest, manages to feel *exactly* like Fall in Illinois. And for all those who missed the creepy blue in the film’s final act, take pleasure in knowing it has been restored, and looks better than ever. In a word, the film looks perfect. I truly cannot imagine “Halloween” looking better than it does here.

THE SOUND: Now… here’s where things get a little messy. The disc features a new 7.1 Dolby TrueHD sound mix. Personally, I think the mix sounds amazing. Every note of music, every line of dialogue (including background lines that were previously crushed and rendered unintelligible by music and sound effects), and every sound is crisp, clear, and immersive. The thunder in the film’s second scene literally made me jump. This is a very well-constructed soundtrack that complements the gorgeous transfer nicely. Now… purists beware, the packaging lists an “original mono” track, and while the disc does include a mono track (but does not make any “original” claim on the menu itself), it is *not* the original theatrical track. Instead, it’s a downmix from either the 7.1 track or the previous 5.1 track from the 1999 and up DVDs and the 2007 Blu-ray (all of which included the original track, adding insult to injury). While this is definitely a good track, it is not what the packaging claims it to be. Why include a mono mix if it is not to preserve the original sound, and what’s more… why claim it is the original track when it is plainly not?

THE PACKAGING: Now, here’s the fun stuff. Anchor Bay has created an absolutely stunning package. A digibook with gorgeous artwork by Jay Shaw (www.kingdomofnonsense.com) finished with orange foil text and embossing, several rare production photographs by Kim Gottlieb-Walker (www.lenswoman.com) featuring stars Curtis, Donald Pleasence, and P.J. Soles as well as director Carpenter and producer Debra Hill, an intriguing essay on the film’s history and power by Stef Hutchinson, and as a nice little treat, a title page that appears to be practically made for autographs. The packaging alone is enough of an extra for me.

THE EXTRAS: Concerning he supplements on the disc however, it should be noted that over the years (and countless releases of the film), everything that is to be said about Halloween… has been said. Several documentaries and a Criterion commentary by Carpenter, Hill, and Curtis have accompanied the various DVDs and previous Blu-ray… this edition of the film is more a “celebratory” edition rather than an “informative” edition. If you are looking at this disc for information on the making of the film, forget it. The extras that are offered, however, are great fun, and are meant to entertain rather than inform.

– Audio Commentary by John Carpenter and Jamie Lee Curtis
This new commentary track reunites the two most prominent and famous figures behind the legendary film. While there are a few interesting bits of information about the production, this track is purely for the fun entertainment value. Hearing Carpenter and Curtis reminesce, compliment each other, and more often than not, bicker over Curtis’ strong reverence for the film and her and Carpenter’s memories not quite agreeing with each other, is fascinating. Curtis is apparently still frightened by several scenes of the film, and Carpenter cannot help but laugh at her (as well as call her out on being a minor control freak, which she fully owns up to on another included supplement). The sibling-like love between them is strong, and makes the listening experience an enjoyable one.

– The Night She Came Home!!
This hour-long documentary by Kelly Curtis and her husband John Marsh, follows Jamie Lee Curtis and Sean Clark for the 2012 Jamie Lee Curtis HorrorHound Weekend charity event in Indianapolis, IN. Narrated by a very candid, but loving Curtis, the film features various staff and volunteers from the event, as well as attendees who went to meet Curtis, as well as Halloween legends Tom Atkins, Tommy Lee Wallace, Nick Castle, Nancy Stephens, and more. It’s a fun look at Ms. Curtis first (and only) appearance at a fan convention and her dedication to making as many fans happy as she can.

As for *new* extras, that is all. However, also included is a short “On Location” featurette featuring co-star P.J. Soles and writer/producer Debra Hill, the film’s original theatrical trailer, several TV and radio ads, and the NBC network scenes shot for the film’s TV debut in 1980. Now, while these additional scenes are encoded in HD, they are simply a rip from the 1999 DVD and are in standard definition quality.

Overall, this is an absolutely stellar release of the classic film, and fans of the film will love the stunning, reference quality presentation of the film. Despite not including the more informative extras from prior releases, I am proud to say Anchor Bay has finally delivered a true deluxe collector’s edition of the night HE came home!