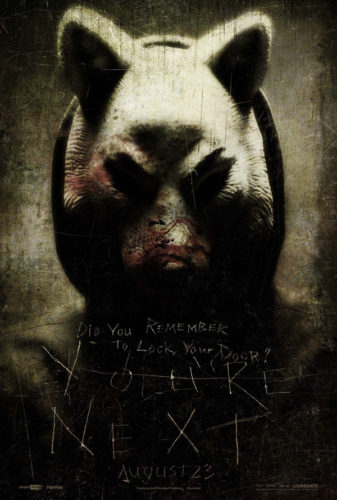 One film I need to watch ASAP is, You’re Next. After missing its short lived life at the theaters, I have heard a whirlwind of emotions surrounding this film. Some love it, some hate it. Not much middle ground. From the comments I have heard though, this seems to be one film I will enjoy.

First of all, I am a huge sucker for slashers and need to see them all, old or new. Second, from what I have seen online, the film has a very nice look to it. The cinematography looks solid and the color tone and lighting seems to be fitting. Third, the masks look epic. This film didn’t do as great as we horror fans could have hoped for, but I would still throw on any of these masks for my next Halloween party. Finally, I hear the dark humor will be right up my alley. I hope the comedy hasn’t been hyped up too much, because a few funny lines can really add too a horror film.

The DVD and Blu-ray release is not until mid January, so unless I can catch it at the cheap seats before its theater life dies for good, I’ll have to wait. But until then, I plan to stay away from too many reviews and trailers so I can go in as fresh as possible, and fingers crossed, make this my favorite slasher of the year!