When I decided to write something up for Women In Horror Month, a bunch of names ran through my head. Amy Steel, Barbara Crampton, Kelly Jo Minter but I decided to go with Katharine Isabelle. The main reason being is I was on IMDB a while back and someone had started a “Favorite Scream Queen” thread. So, I went in and said Katharine Isabelle. Within 10 minutes, I had a reply from someone who had previously said Scout Taylor Compton, Katie Cassidy and Mary Elizabeth Winstead. ” I don’t think she’s been in enough horror to be a Scream Queen.” I was in shock.

She started doing horror themed projects as a teen with roles in The X-Files, Goosebumps and Disturbing Behavior but it wasn’t until 2000 that she really made her first mark in the genre. 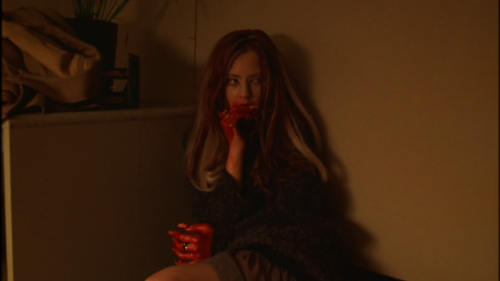 Ginger Snaps was a little Canadian werewolf movie that surprised critics and most horror fans. It was a clever take on the genre and Katharine received great reviews as Ginger. Playing a rebellious teen who is stuck in suburban hell who is then attacked by a werewolf on the eve of her first period, Katharine is electric. As she further evolves into the wolf, you see all humanity slip away from her but even at her worst, she’s still a fascinating character. Both Katharine, Emily Perkins (who plays her sister Bridgette) and Mimi Rogers (who plays their clueless mom) make this movie a darkly comedic horror gem.

Post Ginger Snaps, she did roles in Bones, Insomnia and the 2002 TV remake of Carrie but it wasn’t until 2003’s Freddy VS Jason that she made another mark in the genre. Originally auditioning for the lead Lori, Katharine ended up playing party girl Gibb. In what could have been a throwaway role, she ends up out-acting most of the leads and is one of the few characters I had sympathy for. She also serves as the catalyst to which Freddy and Jason start their battles. As she’s about to be killed in her dream by Freddy, Jason impales her sleeping corpse.

After FvJ, she dabbled a lot in tv shows (having a memorable guest stint on season 2 of Supernatural and a homage to Freddy in an episode of Smallville) and direct to DVD horror (Hard Ride To Hell, 30 Days of Night 2, 13 Eerie). Some entertaining and some not so much. I will say no matter how bad the movie may have ended up, she always gives 100% in her role.

Then came 2012’s American Mary, Playing the tragic anti-hero Mary Mason, once again you witness a character’s descent into dark places. This time though, it’s not a werewolf that causes it but a traumatic incident at a party throw by her teacher. She not only gets her revenge but finds she has a knack for “alternate” surgeries. It’s another memorable character in the horror genre for Katharine Isabelle.

Now, she just wrapped See No Evil 2 and is finishing up a run on Syfy’s successful Being Human before headed to the amazingly dark and twisted Hannibal. A tragically under-watched series that trumps The Following in almost every way.

So, why is she so underrated?

I feel a lot of it has to do with the fact that she’s prefers to stay in Canada. She’s not an LA girl nor does she turn up in a bunch of horror remakes. She works when she wants to. She’s not a big “scene” queen nor does she promote herself endlessly on social media. But she has a loyal fan-base, myself included, that will hopefully keep growing.