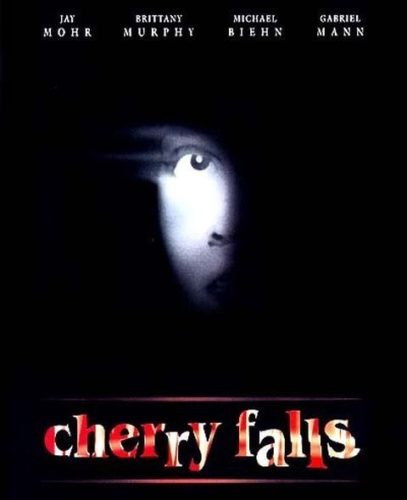 I finally watched Cherry Falls for the first time (“C” of #AtoZHorror in August) and I was pleasantly surprised by this movie. It was everything I wanted it to be, plus more! I have to give props to this movie for keeping it real and not borrow too many things from other slasher movies that came before it. It was trying to pay homage to those movies, and I loved the way they did that.

This movie was the perfect blend of scary frights and witty humor. The cast was pretty good as well. The stand out performance definitely belonged to the late Brittany Murphy who was both a vulnerable and very strong female heroine, definitely one you root for. The rest of the cast was pretty solid too, Jay Mohr, Michael Biehn and Jesse Bradford were good in their roles. The soundtrack is also what really caught me off guard, its both atmospheric and especially hip for its own time. Cherry Falls had some pretty great unexpected twists and turns that came out of nowhere, I really liked that a lot! Its nowhere near as good as Scream but its a great standalone slasher with winks towards previous efforts in the genres. The clever script is what is definitely one of the best things and the pacing is really good along with the blood and awesome deaths and of course one kick-ass final girl!

Its not a Scream clone at all, highly recommend this movie to anyone! You will love the ending too and one hilarious scene towards the end! I see what they tried to accomplish with this movie, and well, it worked! This movie needs no sequels in my opinion…