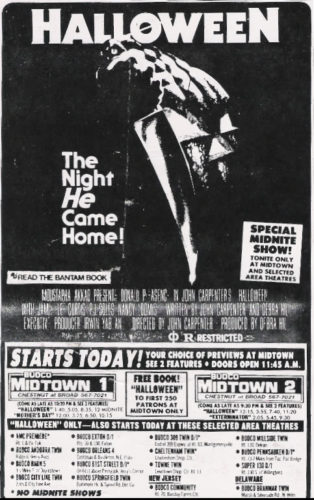 Horror movies are, admittedly, an ambiguous sort of entertainment. For some viewers, they are simply too much, while others find something exhilarating (if not cathartic) in being able to confront their anxieties in a safe way, that presents no actual danger to the viewer. Film itself is all about sensory manipulation, and someone who mastered the technique of scaring audiences through film is John Carpenter. And whatâ€™s more: Carpenter showed, with his early humbly budgeted thrillers, that he could generate strong reactions from viewers without a lot of special effects and explicit violence. Conversely, the brief period of time that he had investors confidently funneling money into his films showed that Carpenter could also produce competent horror films that did rely heavily on special effects.

Here is a look at some of Carpenter’s most noteworthy outings as director:

Halloween is one of the most lucrative (and frequently imitated) horror films of all time. Not bad considering that the film was made for just over $300,000 and featured mostly green performers. The film really solidifies the sort of â€œslasher movie templateâ€ that was used as the basis for film franchises like Friday the 13th and Prom Night. On Halloween night in â€œHaddonfield, Illinoisâ€ in 1963, six-year old Michael Myers slays his old sister with a kitchen knife. 15 years later, while awaiting parole, Myers escapes his mental institution, and returns to Haddonfield to slay a bunch of teenagers. Itâ€™s a thin plot, with even thinner dialogue, a cast consisting of very few principal actors (most of them, completely unknown at the time the film was being shot, with the exception of veteran English actor Donald Pleasence).

A routine scientific expedition in Antarctica soon becomes a macabre playground fit for an evil alien shape-shifter. Whatâ€™s more, the alien is capable of taking over the bodies of his victims. The special effects for this film are incredible. It had the distinct misfortune, however, of opening up against Blade Runner and E.T. â€” so, suffice it to say, The Thingâ€™s theatrical run was lackluster, at best. Even though the film is typically regarded by horror aficionados as a superb eighties horror movie, critics lambasted the film upon its release. The film is also notable as an interesting reinvisioning of the classic The Thing From Another World (1951).

The townâ€™s inhabitants may not realize it, but the sleepy coastal town of Antonio Bay was built atop a leper colony. When the town was first built, the founding government sent a group of lepers from the colony to parish aboard a ship during a storm. Antonio Bayâ€™s centennial is coming up, and theyâ€™ve got a surprise guest: THE FOG. The â€œfogâ€ itself is comprised mostly of the ghosts of those lepers who were killed. They are descending upon Antonio Bay to murder the townsfolk to avenge their own ghastly murder. Carpenterâ€™s than wife Adrienne Barbeau plays a memorable role as Antonio Bayâ€™s disk jockey. Although the film was largely dismissed by critics, it has gone on to become a cult film in its own right.

Prince of Darkness is a movie from Carpenter that has a cult following but was not widely-accepted upon its release. When a priest goes missing and another attempts to find him, an unknown cylinder vat is discovered, adding to the mystery of the disappearance. The priest enlists a team of graduate physics students to help unravel and solve the mystery. Little do they know, evil is lurking all around them. The film features notable performances from Alice Cooper and Donald Pleasence.

Main character, John Trent (Sam Neill), is sent to recover the latest manuscript form popular horror author Sutter Cane (Jurgen Prochnow), only to discover that the monsters and beasts from Caneâ€™s fantasy world have become somehow manifest. Trent finds himself trapped within that world, and struggles to escape it. The film is Carpenterâ€™s most direct tribute to classic horror pulp writer H.P. Lovecraft â€” a troubled, scrawny writer who envisioned a world filled with subaquatic monster gods, who were indifferent to human suffering. Unfortunately, Carpenter failed to secure all of the funding he needed to complete the film as he originally envisioned it, and some critics have mercifully attributed the filmâ€™s lack of coherence to this. Regardless, itâ€™s a richly imaginative film, and one that delivers terrific scares.

Nada (wrestler Rowdy Roddy Piper), discovers a pair of sunglasses one afternoon which reveal to him a dark and evil world that is unknown to most people on Earth. The world, Nada discovers, is controlled by Aliens whose ultimate goal is to enslave all humans and deplete the planetâ€™s natural resources. Nada and his friend Frank (Keith David) are left with the responsibility of overthrowing the evil alien empire. Carpenter wisely (or unwisely) allowed Piper to ad-lib on set, and Piper came up with some doosies, alright. Nevermind the epic fight scene, which lasts nearly six minutes in duration.

After contemplating retirement, Carpenter returned to the scene to direct two pieces to the Masters of Horror series. He contributed two segments: Cigarette Burns (2005) and Pro-Life (2006) Although Masters of Horror is well-known within the horror cult community, it is not one of Carpenter’s most well-received projects.

By and large though, Carpenter has retired. After a series of setbacks In the 90’s,Carpenter decided to be more selective about what projects he pursues. Regardless of the struggle, Carpenterâ€™s film resume is quite impressive, duds and all. Recently, Carpenter was interviewed by Robert Rodriguez on The Directorâ€™s Chair which is available via local tv on the El Rey Network where he talked about many of the films he once created. Carpenter has also ventured into comic books (see here and here). Although Carpenter is not actively making movies at this time, the creations he brought to the big screens will continue to influence many modern horror films today.