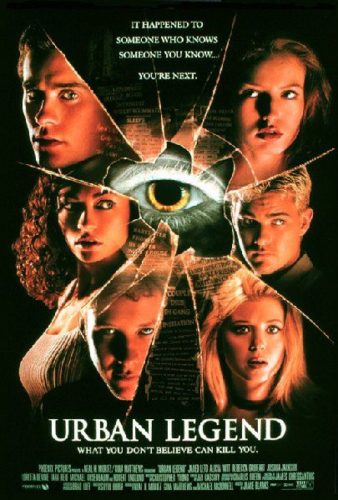 I had seen this movie for the first time 3-4 years ago but somehow I cannot recall anything from when I saw it, so I decided to give Urban Legend (1998) a second viewing (“U” of #AtoZHorror in August/September) and I must say that its a pretty good late 90’s slasher. It has a really awesome and attractive young cast filled with horror legends and soon-to-be famous movie stars. The acting performances in this movie are pretty divided. Jared Leto was really likeable as the male lead, he was pretty charming but also had a knowledge of his own. Great actor in general and he came very far in both music and acting careers.

Alicia Witt, in my opinion, was really bad in this movie. It looks like she wasn’t even trying to make her character look or sound resourceful and/or interesting. I couldn’t care for her character and she was a tacky, bland and forgettable final girl also, if that is the term. Rebecca Gayheart was an absolute trailblazer in Urban Legend, hands down the best performance of the film and her career. Really interesting character development, that’s all I will say. Tara Reid had a fun performance, loved her spunky character. Joshua Jackson and Michael Rosenbaum were fun in this movie too. Also kudos to the phenomenal supporting turns by Loretta Devine, Danielle Harris and the ever awesome Robert Englund! Incredible cast overall! There are some really inventive death sequences in Urban Legend and some pulse pounding chase scenes, in particular the chase in the final act with Tara Reid. There were some surprise jump scares and one fantastic killer twist! The direction and editing are fairy well done. The soundtrack is really fun to listen to and very moody in some scenes.

Urban Legend is nowhere near as good as Scream but it still provides for great viewing pleasure. Its a fast paced slasher that borrows some of previous outings in the genre but also manages to serve us fun characters, great death scenes and a very interesting script. I highly recommend this to slasher fans and movie lovers in general, its worth a watch.