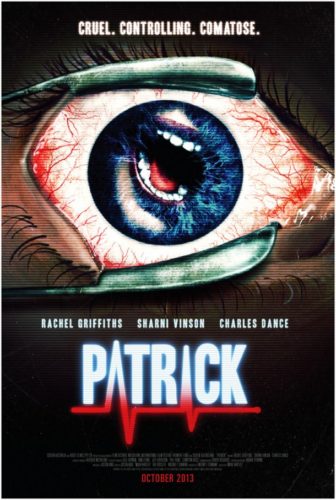 Patrick is an Australian horror remake of the 1970s cult classic starring Youâ€™re Next star Sharni Vinson (Step Up 3, Bait). The film follows the story of a young nurse Cathy who comes to work in a hospital full of comatose patients. When she is introduced to a patient named Patrick her life changes forever. She slowly begins to realize that Patrick has some very special abilities. His obsession with Cathy grows his powers also grow causing Cathy to fear for her life.

Patrick made its UK Debut at Glasgow Fright Fest in November 2013 with a direct to DVD release in August 2014. I went into this film hoping it would be a really intense and creepy thriller and because of the spectacular performance of Vinson in her previous horror hit Youâ€™re Next which was outstanding. However, sadly, this film fell flat on its face with very minor and clichÃ©d jump scares.

The film was definitely one to wait for a Netflix release or a TV viewing. It had its moments where I thought that it could improve but, then again, it fell flat. The only positive I can give to this film was that the story was strong enough that I wanted to see where it ended plus the fact that the film runs just over 90 minutes long was also in its favor.