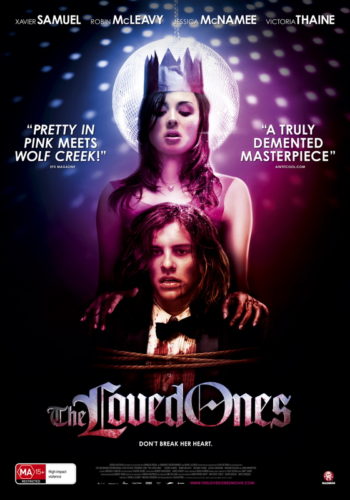 It turns out some girls donâ€™t like being told no and some girls are as bat shit crazy as his captive, Lola. Lola is played by Robin McLeavy in a performance that simply must be seen to be believed. Many actresses would be afraid of going this far with the role but McLeavy is clearly having a ball here. The torture, the prom, the glitterâ€¦everything in her mind has been done FOR Brent and not TO him, if that makes any sense. Speaking of Brent, this is the kind of movie that you just want to give a hug to actor Xavier Samuel once it is over. The things this guy has to go through in order to survive the night and cope with Lolaâ€™ â€œloveâ€ is heartbreaking and it is clear that he will never be the same person again. Nonetheless, I donâ€™t want you to think this a dreary and depressing movie about torture and kidnapping. The movie has a wicked sense of dark humor as well that is perfectly aided by Byrneâ€™s strong direction and screenplay. The fact that the demented father and daughter keep screaming at Brent â€œWE CANâ€™T HEAR YOU!â€ left a twisted smile on my face.