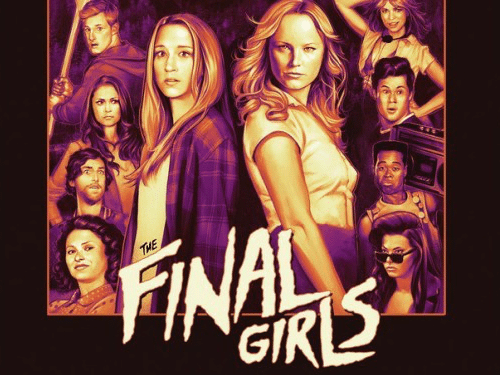 Following the death of her mother Amanda (Malin Akerman), young teen Max (Tassia Farmiga) finds that the only part of her mother that was left behind was the cult classic slasher film she starred in called Camp Bloodbath. One night the revival of the film at the local theater, Max, along with her best friend Gertie (Alia Shawkat), Gertie’s brother Duncan (Thomas Middleditch), Max’s crush Chris (Alexander Ludwig), and Chris’ ex-girlfriend Vicki (Nina Dobrev) escape a fire in the building by going through the theater screen. However, the group then finds they have been transported into the very movie they had been watching. Unable to escape, the group realizes the only way to make it out of the movie is to follow the rules of a slasher film. As the masked killer Billy begins to kill off the characters of the original film, Max is determined to get her friends, and her mother out alive.

The Final Girls is the latest slasher movie that appears in the form of a comedy. Where most combinations of the two fail, this one succeeds. It’s an excellent parody of the slasher subgenre that features plays on the tropes that appear in those films. While it is self-aware of the slasher genre, it still captures the heart of slashers by playing out those tropes in some of the most fun ways possible. Not only this but it cleverly collides the world of 80s slashers and modern day ones. The stereotypical characters from the 80s are here with their very dim-witted knowledge, and then we have our present day characters with their knowledge of horror films and bringing in the world of technology. The way these two world are combined helps boost the story in a very interesting territory that help move it along. The film is rated PG-13, and for a slasher that is a no-no. While I do think the film would have served much better with an R rating and showing some nice blood with the kills, due to the context of the story, the PG-13 rating fits well enough. Despite this it still gives off the slasher film vibe and pays good tribute to it, most especially Friday the 13th. The movie within the movie is essentially Friday the 13th in general, and that alone parodies it quite well. Adding the the nods to the tropes including the stereotypical characters, the sex=death angle, the virgin must survive, and of course the flashback to the story of the killer, along with others. But in its core, The Final Girls also features a deep story with Max trying to reconnect with her mother (even though it’s just the character mother plays), surprisingly enough, the emotions within it work, and it doesn’t get so over-the-top that it detracts the from the horror story. The comedy in the film delivers plenty of laughs, much of it due to the comical characters and even the kills are humorous in how they play out. The whole film is a fun ride that you want from a slasher film, and adding the comedy makes it even better. However, it does leave us with an ending that will leave some scratching their head wondering where exactly it was supposed to be headed.

What really makes the movie fantastic is the cast and characters. The 80s characters are the stereotypical airheads who are only interested in sex, drugs, and partying and the actors including Malin Akerman and Adam Devine shine in their roles as the shy, virginal girl, and the horny pervert. Akerman’s sweetness and sincerity shines throughout the movie, and despite the awkward mother/daughter casting between she and Tassia Farmiga, the two have amazing chemistry and Akerman really delivers in the motherly role while also playing the main girl in the slasher solidly. Devine is hysterical in his role and provides some of the more, if not the most funniest moments. He essentially is the comic relief of the film and does it with ease. Also providing comic relief in a surprising performance is Angela Trimbur as the slut of the the 80s film. This character was easily my favorite and Trimbur was clearly having fun with the role and does a marvelous job providing just as many laughs as Devine’s character. With our young cast we have Tassia Farmiga as our main girl. Now I have never been a fan of Farmiga’s, but she does a fantastic job here and was perfect as the shy, girl-next-door type who has to play the hero, and in her battle with the killer she massively impressed me with the toughness she brought to the character when she needed it. But most especially it was the emotional moments that she needed to bring to the character that really made her acting shine. You can feel the combination of sadness and happiness of the character even in just Farmiga’s facial expressions. Put both of these together and you get a genuine main girl that you root for in a slasher film. Nina Dobrev is also surprising in her escape from her role in The Vampire Diaries as Vicki, the clingy, bitchy, ex-girlfriend to Alexander Ludwig’s character. Dobrev sells the bitchiness, but also shows that there is more to her character than that as the film progresses. I was also impressed with her excellent comedic timing, she doesn’t hold up compared to Devine and Trimbur but I found her the funniest of the main group. The rest of the cast does extremely well with their roles and stay in character the whole time. Overall, the cast is just downright amazing all of the characters are likable. What sets these characters apart from other slasher films is that despite the stereotypes (which they are very aware of), they actually pretty damn smart and sensible (especially Nina Dobrev’s character surprisingly).

The Final Girls is an excellent slasher that despite its tame rating provides the right amount of spirit and respect to slashers old and new and gives us great comedy with it by playing with the horror tropes, and also giving a pretty sincere and moving subplot of mother and daughter. Along with this is an excellent and lovable set of characters that you find yourself wanting any one of them to make it out alive. The cast I couldn’t praise more who have such amazing chemistry together and really bring the characters’ personalities and emotions to life. While the rating and ending might leave some people bitter, the pros outweigh the cons.