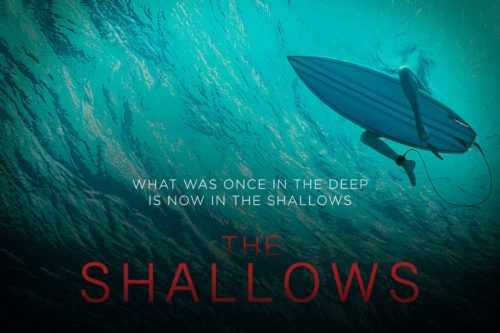 In wake of the cheesy and not even remotely serious shark films weâ€™ve seen on the small screen, and following the disaster that was Shark Night, we are given a new shark film for the big screen. This film, directed by Juame Collet-Serra, is a thrilling survival film that breathes new life into the shark horror subgenre. Itâ€™s definitely not a body count film like most shark films, although there are a few deaths. This is purely a single person survival story. For the most part, the shark is kept hidden throughout the film until well towards the end. This doesnâ€™t ruin the film in any way. Although I do have a problem with CGI shark, and especially the horrible CGI dolphins. Sure, it was a small budget film, but I was hoping for better. That aside, the scene with the shark are very intense.

As for us being stuck on a rock with our main character the whole time, it works just fine, because she really doesnâ€™t stay on the rock the whole entire time. She tries to use her wits to try escape, but fails several times, and thanks to the short running time. The thrills are there but what I felt the film was lacking was dramatic depth, it had a little bit thrown in, but they could have given our lead character much more background in order for us to see her become stronger. Instead all we get is that her mom died, and as a result she drops out of medical school. Had it shown how genuinely her momâ€™s death affected or some other type of event, the drama could have been used to make the character of Nancy, while very likable, but more rounded. However, my biggest complaint comes in the final action sequence in which Nancy faces off with the shark. It does have all the ingredients to make this sequence thrilling, but at the end of it, it had me groaning with how far fetched it was in the sense that no one would think of doing the things her character did. I just find it hard to believe that humans are that smart, and it just made the character seem slightly less realistic.

Blake Lively carries the movie perfectly. I admit, I thought she was a very lame actress on Gossip Girl, but as her actual filmography grew, the more sheâ€™s come to impress me. She can easily play the strong female lead with ease, and with the little dramatic scenes she does have, she does make you feel for the character. Oh, and she has great chemistry with her seagull companion Steven Seagull.

The Shallows, despite its disappointments, is the shark film we needed to revive the subgenre. Itâ€™s beautifully directed, acted, and thrilling. Letâ€™s hope we can get more shark/aquatic horror films like this, and less like the SyFy channel crap weâ€™re getting too used to.