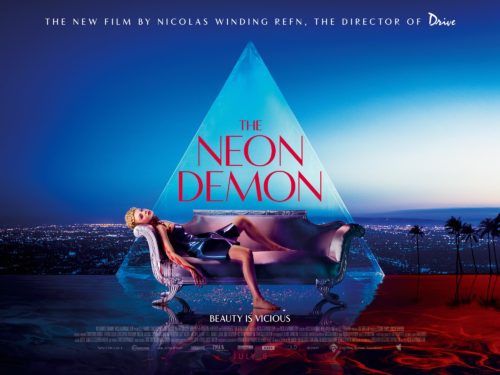 Jesse is a young teen who dreams of making it big in the world of modeling. Moving to Los Angeles, she believes she has a chance. But she slowly begins to realize that the world of fame and beauty is much darker than she thought. As more begin to praise her for her beauty, the further Jesse follows the path of darkness in not only herself, but in the world sheâ€™s entered.

This new drama/horror film is presented by Nicholas Winding Refn who brought the beautiful thrill ride that was drive. This time around, Refn stays with the beautiful drama, but adding in horror to the mix. The film itself isnâ€™t entirely horror, but instead itâ€™s a drama that follows the path to horror along with the character Jesse herself. The film is gorgeous too look at with the bright neon colors, and the craft of lighting, but also the chilling and at times beautiful score by Cliff Martinez. If this wasnâ€™t an independent art film, and had been a script adapted for modern audiences, this could have a super predictable film. While the story is more less been seen before, itâ€™s much more serious in the fact that we follow our lead character so close in her changes and her world that we really get a grasp on everything sheâ€™s experiencing. When the final act comes around and it becomes a full-on horror film, the shift is just pure shocking and we are left thinking, what in the hell is happening. Itâ€™s not that itâ€™s random, but because we canâ€™t believe it went as far as it does, despite the fact that weâ€™ve been following the path to this from the get-go. To me, the ending was perfectly dark and disturbing and should have ended with the bathroom scene. That would have been a huge punch in the gut, and an even darker way to end it. However, everything after the bathroom scene fall into the category of very over-the-top and just plain silly.

Elle Fanning delivers a beautiful and haunting performance as Jesse and does a marvelous job of showing Jesseâ€™s gradual changes through the film as we see her change before our eyes. It is this performance that genuinely shows she has a great future ahead of her (even though her breakout role in Super 8 already did show this). Jena Maloneâ€™s performance as the mysterious Ruby who befriends Jesse provides her best performance yet. Malone perfectly captures the mystery of this character and keeps us guessing whether we can trust her or not.

Neon Demon is a beautiful film in every aspect in terms of script, cinematography, score, direction, and acting. I wish I could say I loved the film, but sadly, the silliness of the filmâ€™s ultimate ending really hurt this one for me. But when itâ€™s all said and done, itâ€™s a wonderfully crafted film that true film lovers will appreciate.